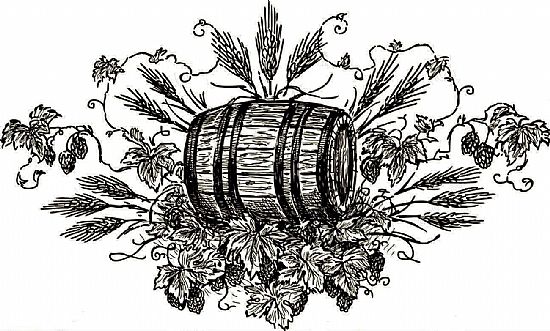 The Brew House at Nanteos

Every large country estate had its own Brewery; the Brew house at Nanteos was located at the rear courtyard in the service area for the mansion. It is a two-storey building that still stands today. Having a brewery on two floors help with the gravitation system, in producing the beer. 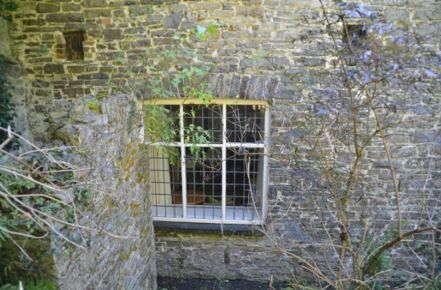 Rear, north facing side of the brew house.

Access to the brewery was via three entrances, one entrance located in the courtyard, the second entrance is located at the rear of the mansion, close to the main water supply. The third entrance was on the first floor close to the dairy and delivery area. This is where the hops and supplies would have been brought in, via the rear of the stable block where the main deliveries for the mansion would arrive.

The main water supply to the mansion supplied piped water into the brewery. This was located at the rear of the main part of the mansion, the water was sourced from the pond above which flows to this day, but no longer supplies water to the mansion. 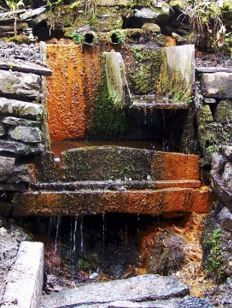 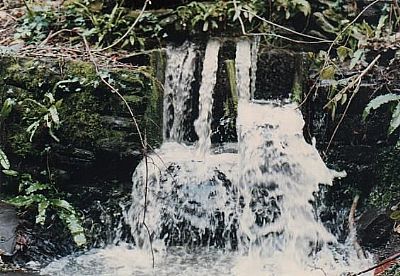 The old water supply of the mansion, showing a trickle and in full flow.

The windows of the brew house were covered with mesh, to stop insects flying in, as the windows were often open due to the room being incredibly hot. The air vents can still be seen on the exterior walls of the two-story building with louvered ventilation lanterns on the roof, together with a large chimney. 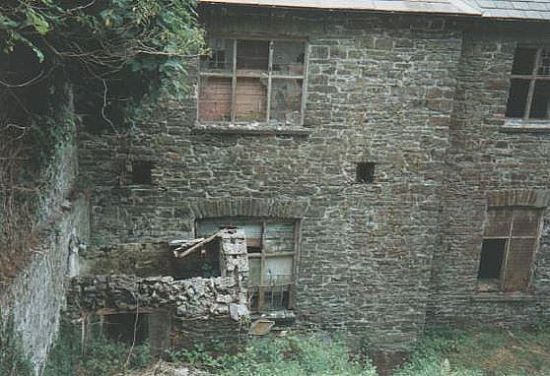 The photograph above taken in 1991, shows the brewery with the air vents and mesh covered windows can be seen (the small roofless building in front on the left is a disused 18th century water closet). 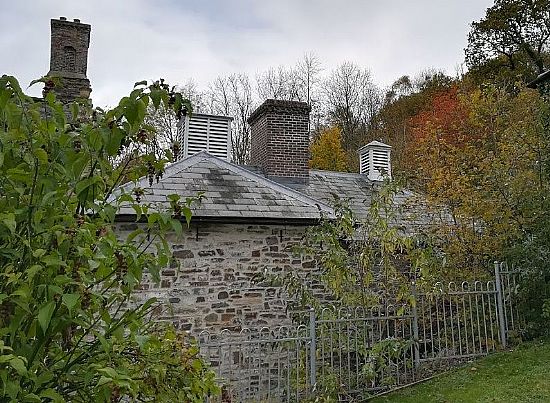 This photograph shows the renovated louvered ventilation lanterns and a large brewery chimney in the centre. 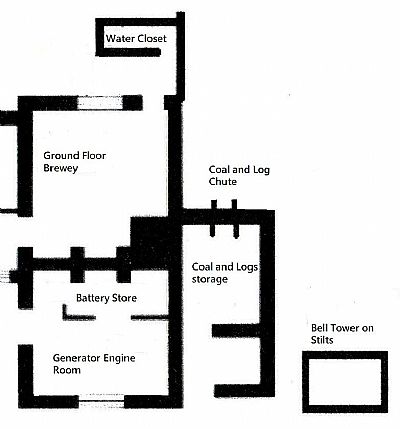 The brew house had a furnace to heat up the copper in the corner of the room and a fireplace with an oven, bread was occasionally baked here as well. The copper was larger than the copper used in the mansion, as the brew house required a lot more water than the household. 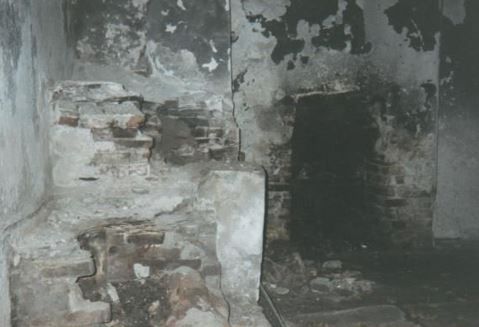 The remains of the brew house in 1992 showing the furnace and boiler and fireplace on the right.

Not much is known about the bakery within the Brewhouse, it has been said that the bakery formed part of the brewery, during what period is difficult to ascertain. Conditions in the brewery would have been perfect for bread making what with the warm environment within the brewery.

In later years, when the bread making at the mansion stopped, fresh daily bread came from Tyn y Cwm, Capel Seion (who had a double oven), every morning the bread was delivered down through the fields in baskets, by one of the eldest daughters of John Richards before she went to school.

There is little reference to staff working in the brew house in Nanteos collection held at the National Library of Wales, but enough to give some detail. Brewing was seen as a man’s occupation, heavy work and long hours in sometimes hot conditions. However, in 1778, Jenny David was employed as a brewing maid. A brewing maid would help with the lighter tasks of the brewing process. In 1864, there is reference to a brewer at Nanteos, namely William Goose. He was a long standing brewer at Nanteos and was being paid £13.4.0d per annum.[i] The two people above named are the only two listed as Brewers in the Nanteos papers, there were no doubt many more, but sadly details are lost in history. The above dates of 1788 and 1864 alone show nearly a century of brewing at Nanteos.

Brewing was a seasonal occupation, mainly from October to March. William Goose mentioned above originally from Lincolnshire, made his living as a tenant sheep farmer living at Nantybenglog Issa farm, in Capel Seion. During the 20 years he was at Nantybenglog Issa and would regularly travel down to Nanteos, about 2 miles in distance to produce beer in the brew house. In 1887 for reasons unknown, he leaves his tenancy and returns to England.

Brewing process was complex, and an experienced brewer was well sort after. Various equipment was required to make the beer, below is an early Nanteos inventory of the utensils that were used.

The Brewery Inventory of 1793 at Nanteos

14 Vessels for working the beer in

7 buckets for carrying the beer into the cellar

3 buckets for working the beer

An iron hook to open the furnace door with

The grains used for brewing were not grown at Nanteos, Bushel of oats and barley were bought from their tenant farmers. Here is one example:

Crops would have been taken to the Oast and Malt houses in Trefechan, near Aberystwyth, to be malted. The barley was soaked, sprouted, dried on the kiln and kibbled, and once processed the grain would be picked up by wagon by a Nanteos worker.

There were several Malt houses were in Aberystwyth, below are named a few.

Back to the brewery at Nanteos the grain would have been taken to the upper floor of the brew house and placed in a lead-lined vats or wooden tubs full of boiling water, heated from the room below to form a boiling mash of grain. Using a fork (pictured below), would aid the procedure.

A Mashing fork that would have been used at the Nanteos brew house.

After the hot mashed liquid is boiled into wort and cooled, the sweet liquid of unfermented beer was piped to the lower floor where the yeast was added, and the fermentation process began.

Brewing work was irregular and often seen as a winter occupation. The hours were long, beer need much attention during the process. Hard working conditions, with boiling water was heavy work. The beer was ready to drink in about one day or stored longer for a more refined beer. Making the most of the process a ‘Small beer’ which was lower in alcohol was made with the second usage of the grain instead of wasting it. The lesser in strength beer was drunk by women and children.

Once the beer process was complete it was ready to be stored into bottles and barrels. Empty barrels were taken down to the cellar, supplied by the cooper who produced them in Southgate. Barrels were placed in the cellar and the beer would then be carried across the courtyard in pails into the service area of the house and taken careful to avoid spillages, down the steep steps into the cellar, where the large barrels were then filled. 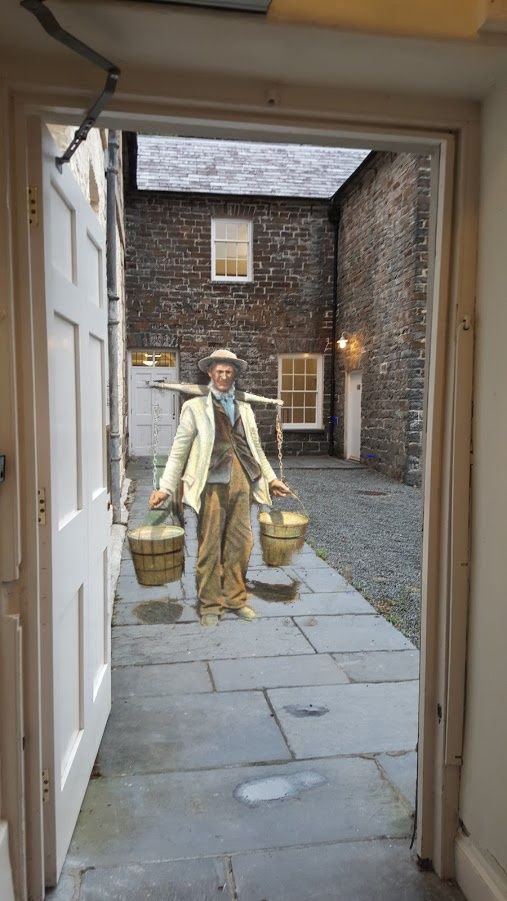 As the above photograph shows, the beer would have been carried in pails, down into the cellar. They would have come from door in the background of the photograph and walked along the slate slab paving into the rear of the mansion and down to the cellar hopefully without any spillages. 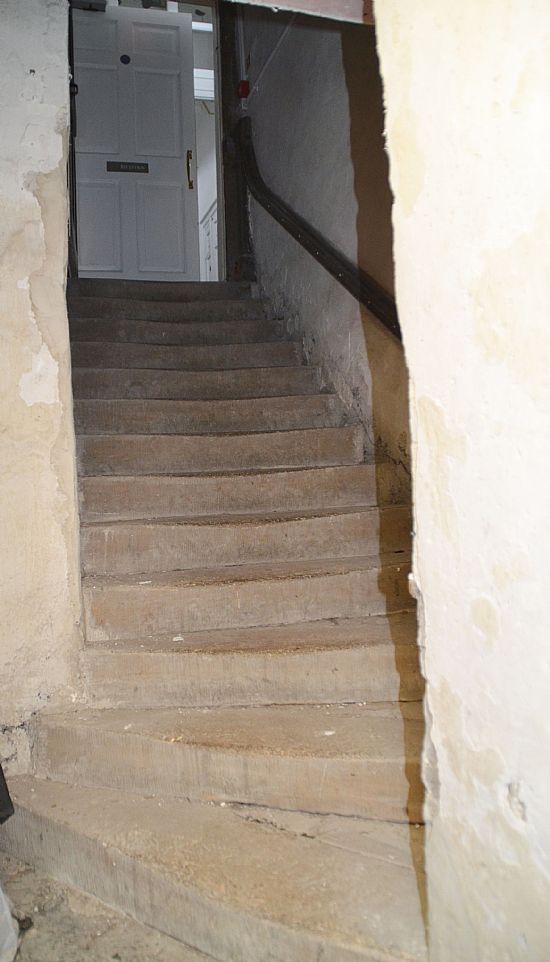 Concrete steps leading down to the cellar. 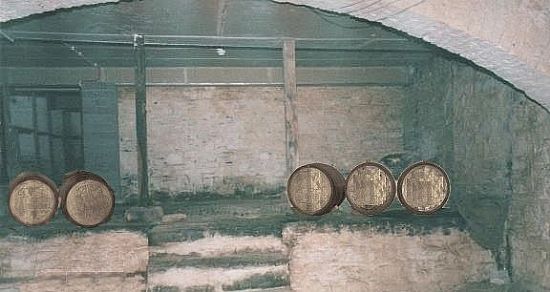 An example of where the barrels were kept in the cellar, Barrels were filled with beer by jugs and funnels.

As mentioned above the beer was produced seasonally but extra brew was produced for different types of occasions. First and foremost, plenty of beer was produced for harvest time. Beer was heavily consumed during the hay making season. Flasks and flagons were taken down to the field to the Harvest labourers that arrived to help out, together with the arrival of the local contractors with their threshing machine, many gallons of beer were required.

The contractors visited all the farms in the area, with the local farmers and servants helping along the way. Harvest time was a highlight of farming; it was hard work and the community came together to help, with many extra hands and making the extra beer was essential so that everyone was provided for.

Celebrations was also a time where more beer was produced, especially family occasions, weddings, christening and coming of age for the master of the house. Other occasions were Christmastide and Royal occasions.

Celebrations for the monarchy, was a chance to celebrate. The Diamond jubilee of Queen Victoria was celebrated in style at Nanteos, in the servant’s hall in June 1897, and another celebration that year was the marriage of Edward Powell and Margaret Pryse of Gogerddan, uniting two large estates of Cardiganshire.

It is difficult to pinpoint the closure of the brewery at Nanteos, it probably closed down in the early 20th century, as the estate diminished.  When brewing came to an end, the first floor of the brewery became the laundry room, and the washing line were located to the rear of the stables, though it is uncertain when this happened.

Today, Nanteos is a Country Hotel, and the Brewery area are luxurious suites. On the first floor is the George Powell Suite and the Hafod Suite on the ground floor. 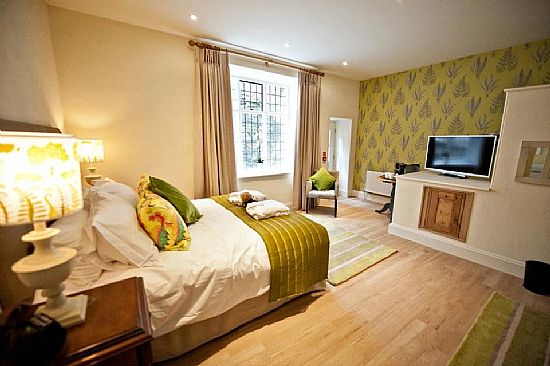 The Hafod Suite (above) located on the ground floor, which was once the Brew House. The ovens are still in situ, and tasteful incorporated in the bedroom suite. 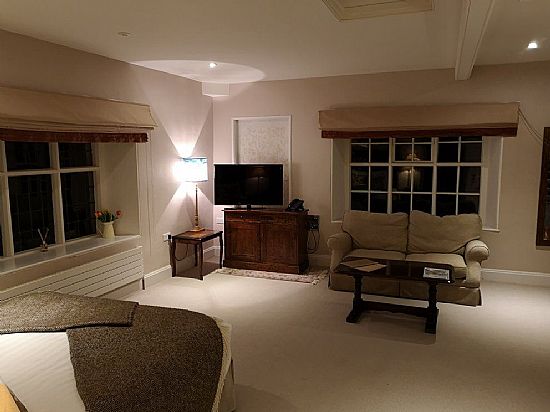 The George Powell Suite (above), on the first floor of the Brew House, which later became the Laundry room. The doorway can be seen in the corner.

William Thomas Rowland Powell’s pewter monogrammed tankard, with glass bottom base. Probably given as a Coming of age gift, in 1836. 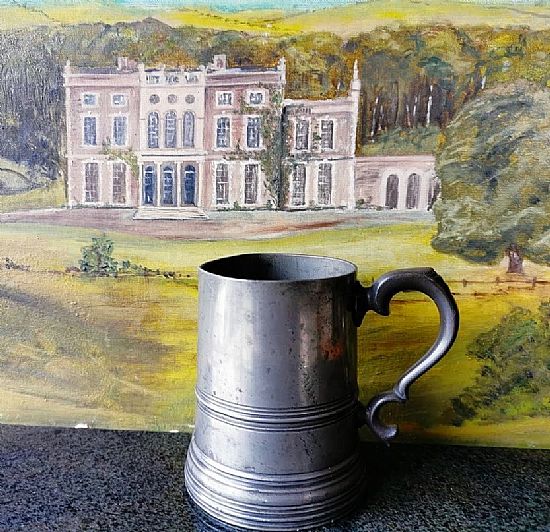 [i] National Library of Wales, Nanteos A30