The Billiard Room at Nanteos

The history of the Billiard Room in grand houses stems from the 15th century as mentioned in an inventory of King Louis of France. Gradually, the game became popular in Great Britain by the early 19th century. In the mid1860s, William Thomas Rowland Powell decided to have a Billiard Room of his own at Nanteos. He commissioned architect D. Kyrke Penson (19 June 1815 – 22 May 1885) to build the extension which was added on the East side of the mansion, solely for Billards. 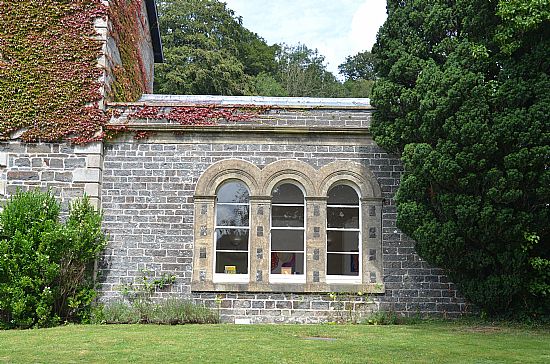 The three arched windows on the extension are similar in design to the windows of the Lodge built in 1857 and also what can be seen on the remains of the kennels in the parkland at the front of the mansion. 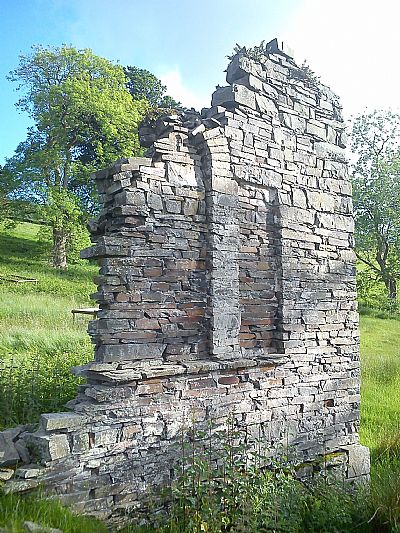 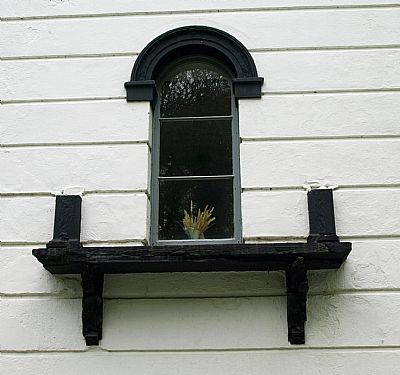 Kennel ruins in the parkland.        One of the windows at the Lodge.

The interior of the Billiard Room measures 27 x 19’4 feet (8.20 x 5.90 meters), which had a full size Billiard table, placed in the centre of the room under the roof windows so that the players had strong light in which to play. 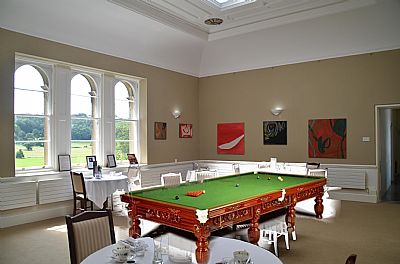 The photograph is an illustration of where the Billiard table would have been located in the room.

Playing Billiards or snooker required proper lighting; the glazed roof windows are located in the centre of the room to giving plenty of light; and during the evening 6 wall lights lit up the room, together with a lamp and one colza pedestal lamp. 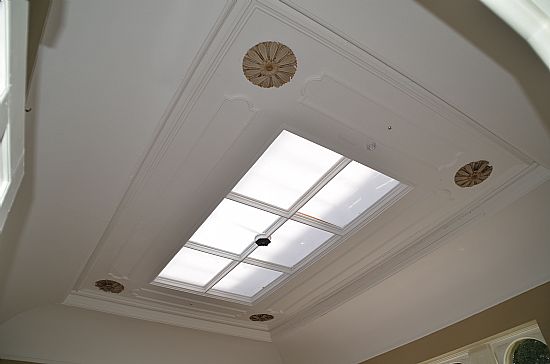 A clearance of about five feet was vital around the Billiard table so that a shot could be taken with ease and without interference.

From the Nanteos inventory of 1878 and 1882, there are listed various items that accessorized the Billiard Table. There were 3 sets of balls, pyramid balls; 31 cues all kept neatly on a Mahogany Cue stand with 2 scoring boards; 2 maces and 1 long rest and short rest and also, a pool board.

For seating there were 11 oak chairs, and 1 oak arm chair together with 2 mahogany leather covered couches. 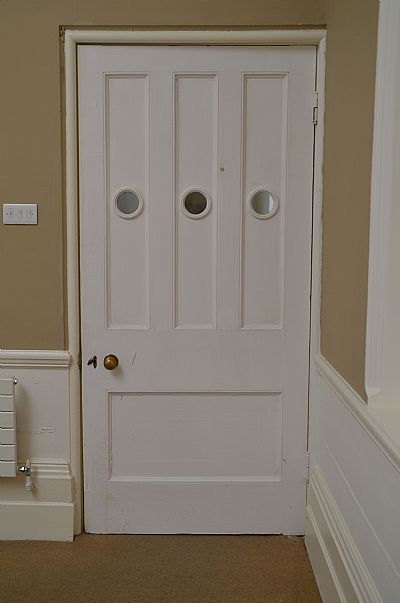 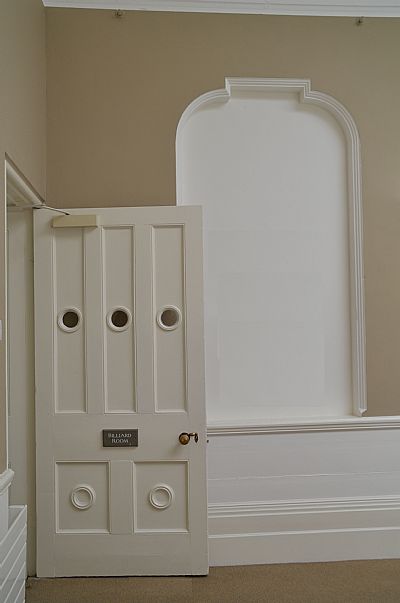 The only door entering the Billiard Room is unique and made on the estate; it has three small circular windows built into the door. These were important peep-hole windows, people entering were meant to check whether a shot was about to be taken, as not to disturb the player before entering the room.

Near to the fire place on both sides were tapestry sash bell pulls, the actual bell that rang was located at the end of the long corridor, which would then echo down to the service area. The servants would immediately attend, but checking through the peep-hole first before knocking the door.

Also, listed on the inventories surrounding the fireplace was a fender and set of fire irons with a brass fire guard. 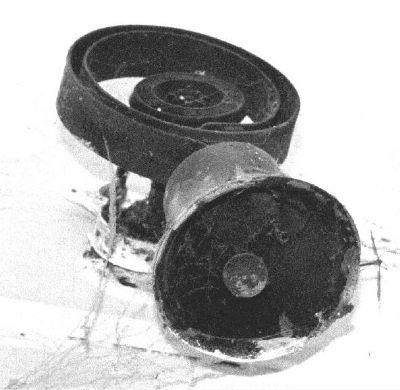 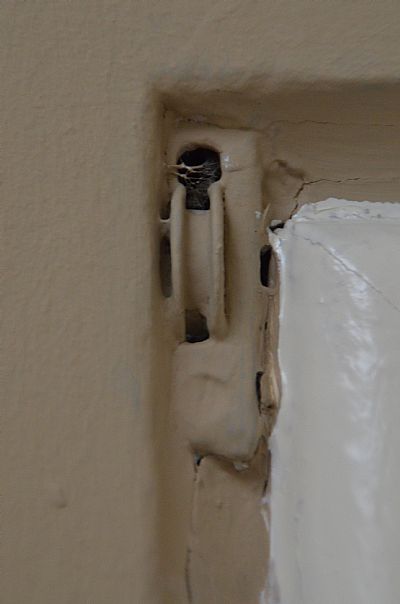 On the left , the bell that was located at the end of the billiard room corridor, which has since disappeared;  and on the right a pulley for the bell wire which remains intact today.

The Billiard Room floor is of wooden floorboards, made from wood on the estate, like most of the other rooms of the mansion. But William Powell wanted to cover the floorboards with a new invention of Linoleum a new oil based floor covering, which softened the floor for comfort and the occasional dropping of a Billiard ball onto the floor. The linoleum also changed the acoustic of the room, absorbing any echoes of play. Linoleum was made of solidifying linseed oil and adding with cork and colouring agent, which Frederick Walton patented in England in 1863.

Playing in the Billiard Room at Nanteos strict rules had to be abided by, and the notice on the wall, would remind people to behave in a proper manner, if not fines were imposed.

RULES FOR THE BILLIARD ROOM

When the half hour before dinner Bell rings, all Play to be suspended.

If there should be any Billiard or Card playing after Dinner,

It is requested that at the hour of Eleven, all play shall cease.

Swearing, or improper language, to be punished by a Fine of Sixpence.

Spitting on the floor or fire-place, to be punished by a Fine of

Threepence for each offence.

Smoking allowed. For each Cigar taken from the Box, it

Is expected that One Penny be dropped into the Poor-Box.

Any playing after Half-hour Bell, or after Eleven at night.

Punished by a fine or One Shilling or every quarter of an hour.

Every person remaining in the room liable to the same penalty.

It is requested that all Balls after a game of Pool shall be put into a Drawer, and not left in the Pockets.

The servant having care of the Billiard Room is ordered to

Put out the lights at Eleven o’clock, or immediately after the

conclusion of the game in hand.

Any person cutting the Cloth will be fined a Pound. It is requested

that any person coming in or going out of the room, will shut the door.

under the fine of One Pound.

That no Glasses or Bottles or Jug or Candle, be placed on

the Table under a fine of One Shilling.

N.B. All fines to be put into the Poor-box and a penny

to be also put therein for each game played.

The Poor Box, mentioned in the Rules above, was in fact a Rich, Bridgwater Patentee Brass Tobacco Tavern Dispenser or otherwise known as an ‘Honesty Box’, dating from around the early nineteenth century and originally used in Taverns and Ale Houses. The box was kept at the countertop where the drinks were served at an establishment - tavern or inn, permitting the smoker to obtain a pipe full of tobacco for 1d (one penny). The ‘honesty’ part of it came with trust; they would fill only their pipe-bowl with tobacco and not their pockets! 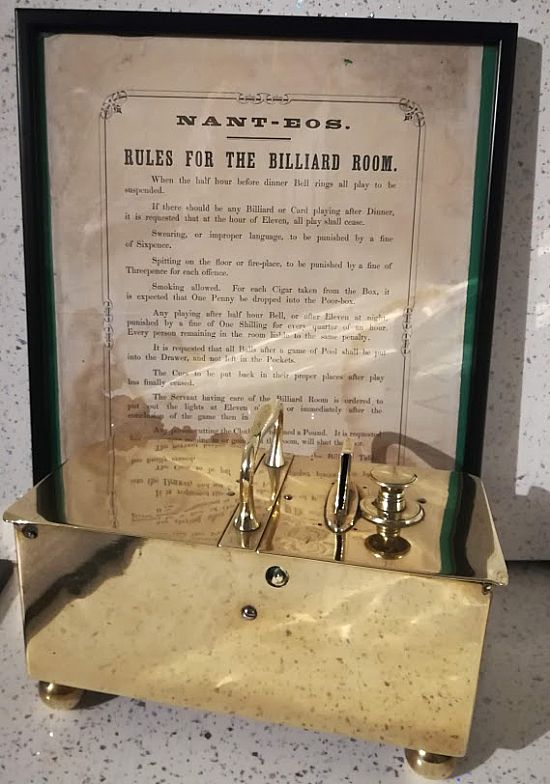 The Rules of the Billiard Room; together with the ‘Honesty Box’.

The rectangular box measuring 7inches x 9½inches x 4¾inches (18cm x 24cm x 12cm) is mounted on four ball brass feet and has two hinged lids. The left hand compartment beneath the slot is for the coins and the right hand compartment is for the tobacco and can only be accessed by placing one penny coin in the slot. Smokers wishing to gain access to the tobacco would put the penny in the slot, press down the button and the lid of the tobacco compartment would spring open by means of a coin mechanism inside. The brass box was kept locked and only the landlord of the tavern would have the key.

It is uncertain how William Powell had obtained his brass box, but he used the ‘Honest Box’ in the Billiard Room as a ‘Poor Box’ and with the collection of fines mentioned on the list above was paid into the box. When sufficient funds were accumulated, he would give the money to the poor of the area surrounding the Nanteos Estate. The Billiard room’s supply of tobacco was kept in a ceramic Sailor’s head tobacco jar.

Entries in the Nanteos inventories also show many paintings and engravings adoring the walls of the Billiard Room, showing a strong passion for the hunting and sporting scenes.

Below is a list of engravings and sketches that hung off the picture rail in the Billiard Room.

Along with the framed works in the room, were various smoking paraphernalia, cigar and tobacco holders, spill (tapers) boxes, 4 brass spittoons to dispose of chewed tobacco by spitting into. Spittoons can date back as far as the 16th century, but were gradually phased out during the late 19th century as they were seen as unhealthy and spread diseases.

Billiard and Snooker were not the only games played in this room; playing cards and solitaire were also played. 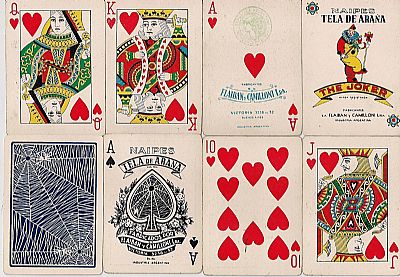 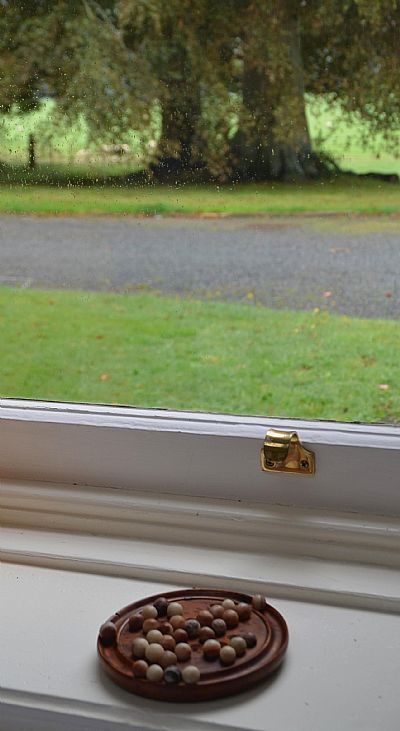 A quick game of solitaire while it's raining outside !

William Powell died in 1878, and his only son George bequeathed the estate, (all be it for four years) until his death in 1882. There are hardly any changes between the two inventories, though in the 1882 inventory taken on George’s death the brass box is listed as ‘The Colonels Poor Box’. 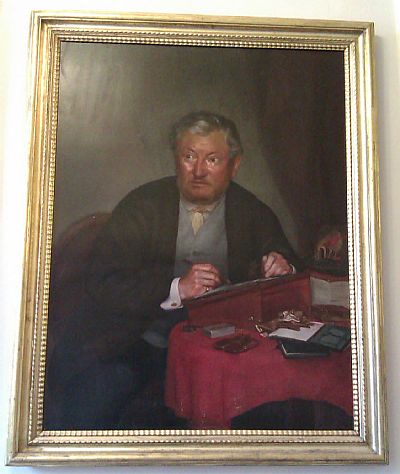 The Billiard Room was sadly emptied in the late 1950s, when the last of the Powell family at Nanteos passed away, and the room became a place where Pekingese dogs were bred by the Mirylees family.

Since then the Billiard Room has been used for various types of things, including an art studio in the 1970s with the galaxy of stars and planets painted onto the floor. 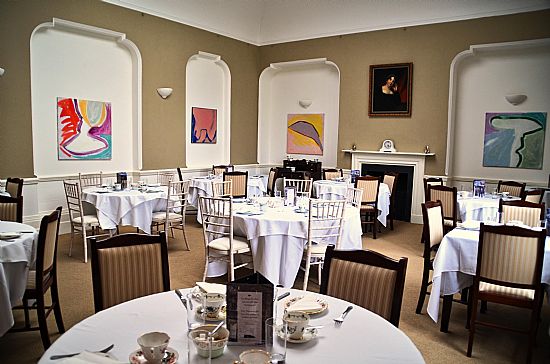 The Billiard Room: a warm and inviting tea room at the Plas Nanteos hotel.

The Billiard Room was a function room for the Plas Nanteos Hotel until 2020, and used for weddings and afternoon teas, Then a Victorian snooker table was purchased bring the splendid room back to what it should be. 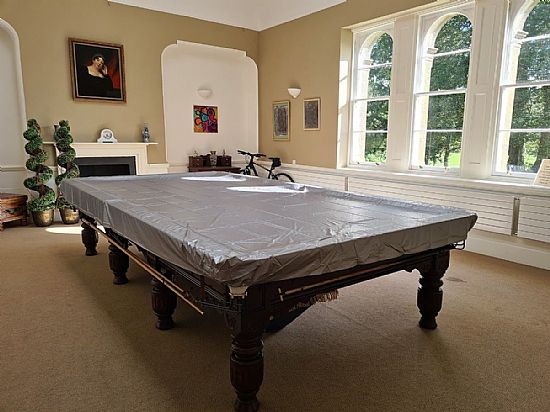 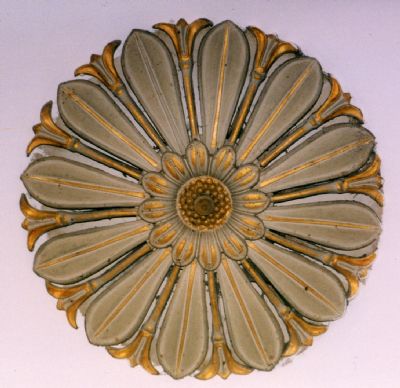