The Holy Grail a small fragmented vessel also known as the Nanteos Cup or Cwpan Nanteos, said to be The Holy Grail used by Jesus Christ in the last supper.

Itis believed to have come to Nanteos with seven monks from Strata Florida, Cardiganshire, on the dissolution of the Abbey in the reign of Henry VIII. The abbey disbanded in 1539 and it said that seven monks escaped from the Strata Florida Abbey together with the Cup and fled to Nanteos, where they stayed. When the last monk passed away and Cup was left in possession of the Joneses of Nanteos. The sacred vessel was kept safe for many centuries at Nanteos. It is said that the monks are buried near the two beech tree in front of the mansion that stand majestically today. Through marriage the Powell family took over the Nanteos estate in 1699.

The history of this Cup begins to evolve into a Healing Cup where people were cured of their ills by drinking from it. However, it is many years later it makes a first public appearance. The Nanteos Cup was put it on display at the college of St. David’s University of Wales, Lampeter by George Powell where it was displayed in a ‘Cambrian Archaeological Society ‘exhibition in 1878. From the onset of its first public display, word of its power as a Healing Cup began to spread; it was displayed quite regularly in various local meetings and lecturers etc.

George Eyre Evans an antiquarian and local historian living in Aberystwyth at the time became very interested in this vessel and with regular visits to the Powell family at Nanteos organised a public event. A tour of Strata Florida Abbey and Nanteos in a charabanc was arranged by George Eyre Evans with the Chautauquans (an Adult Education movement). The visit was planned in 1901, and a small photograph Album of the event can be seen at the National Library if Wales. (NLW Photograph Album 240a). Ethelwyn Mary Amery, one of the members of the movement, wrote Sought and Found: A story of the Holy Grail, in 1905, giving the history of the Holy Grail and it origins. So impressed the Powell family were by Miss Amery’s visit to Nanteos one of the room on the second was name after her.

George Eyre Evans certainly popularized the Nanteos Cup and word spread of its powers. Correspondences kept in the Nanteos Archive Collection at the National Library of Wales shows the great interest it generated worldwide.

PENPARKE THE HOLY GRAIL.—Cwpan Nanteos, kindly lent by Mrs. Powell. Will be on view at the exhibition at Penparke National School next Tuesday afternoon and evening in connection with the patriotic sale in aid of the Sailors and Soldiers Fund organised by the Women's Sewing Circle. The sale will be opened at 2.30 by Dr. Roberts, Penywern. There will be several interesting features, including the Aberystwyth war book containing items from the weekly papers, portraits, prints, etc., since the declaration of war. There will also be historical articles from the homes of Vicar Pritchard, Williams Pantycelyn, arranged and explained by Mr Geo. Eyre Evans.

With the public appearances and publications etc., by the 1920–30s the Cup came very well-known.

On the 15th January 1930, The National Library of Wales borrowed the Nanteos Cup, for an exhibition. The Cup was carefully wrapped in a rug and placed in the safe hands of Maggie Williams, the housekeeper and taken from Nanteos. David Walters, the groom, took the quietest pony to pull the cart to take Maggie and the Cup to Hen Cwrt, the home of the Librarian, Sir John Ballinger. Sir Ballinger would be responsible for the Cup while it was away from Nanteos. 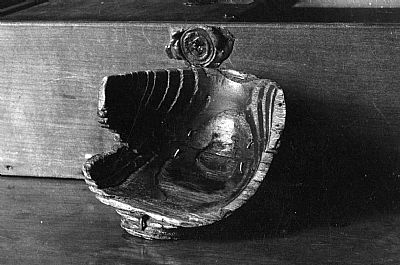 People from far and wide came visiting to Nanteos to drink out of the Nanteos Cup.  Margaret Powell had a routine to the Cup lending, which was as follows:

The Cup was kept in the library at Nanteos, locked in a cupboard. The Cup that was on display was a replica made by Richard Rees Jones of Rhoserchan, Isaf, Capel Seion. The visitor that wanted to drink from the Cup would be sent into the Morning room to be greeted by Margaret Powell. Maggie the Housekeeper would be in the Library placing the genuine Cup on display instead of the replica and was put on display on the table between the two windows. She would fill it up with water, and then Mrs. Powell would enter the library from the morning room with the visitor. The visitor then drank from the Cup. After the water was drank Mrs. Powell took them into the dining room and slammed the door loudly so Maggie could hear. Maggie said that once she heard the door slam she would then take the Cup, dry it and then replace it with a replica in case anyone tried to steal it, and replace the real Cup in the locked cupboard. She said that this was done every time when a visitor called.

Cup lent this day to James Morgan....... Left a sovereign.

With the selling of the mansion in 1967, the Nanteos Cup left Nanteos and taken to Ross on Wye, where it stayed, while still being used to heal the sick.

In July 2014, the unthinkable happened; the Nanteos Cup was stolen, and made International news. While its owner was in hospital someone broke into their home and stole the Cup. For 11 months the Cup’s whereabouts unknown, then miraculously the Cup was handed to the police in Herefordshire. The scared vessel was handed over to the police and no arrests were made.

Today, a new chapter begin with the Nanteos Cup. The Cup returns to the National Library of Wales for safe keeping. 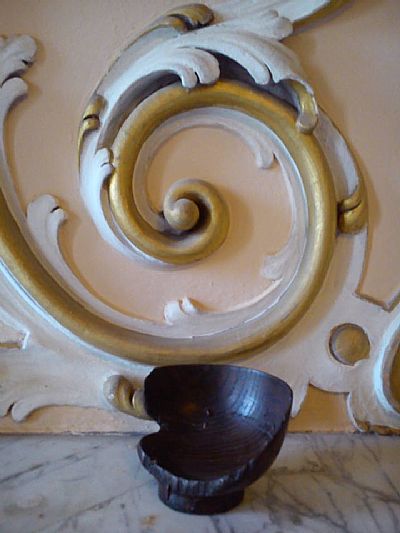 The Cup now measures only 10cm by 8.5cm, is held together by wire staples and fits comfortably in the palm of the hand. 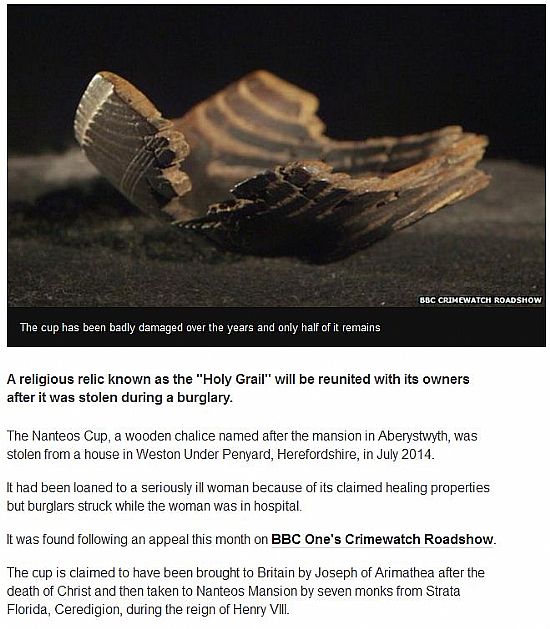 The Grand unveiling of the Nanteos Cup

at the National Library of Wales 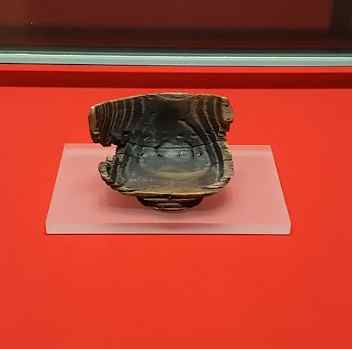 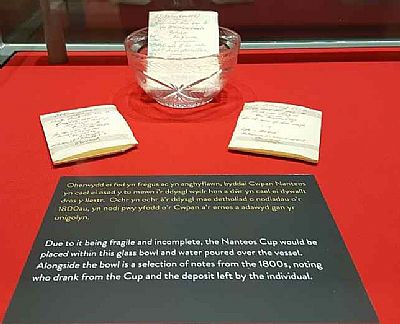