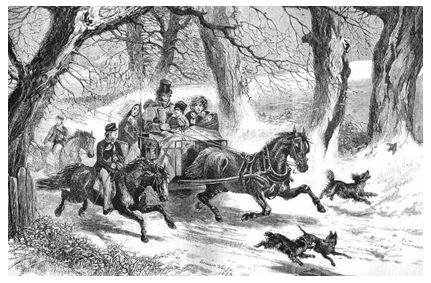 Christmas was a busy season on a country estate and Nanteos Mansion near Aberystwyth, the seat of the Powell family, was no exception.

The preparation for the festive season began early; the storage sheds in the Nanteos walled garden would have stored fruits and vegetables that would last through the winter months. From 1936 until the late 1950s, Reg Newman ran the walled garden at Nanteos as a market garden, and also grew produce for his shop in Terrace Road, Aberystwyth (he also supplied the town’s Co-op store). Dan Stephens worked for Reg Newman and from early December Dan would be busy in the Generator Storeroom in the Nanteos courtyard making wreathes for the estate and the shops, using ivy, laurel & holly from the Nanteos woods. 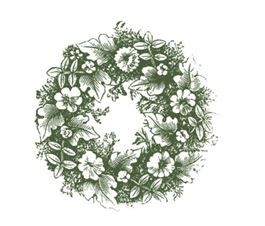 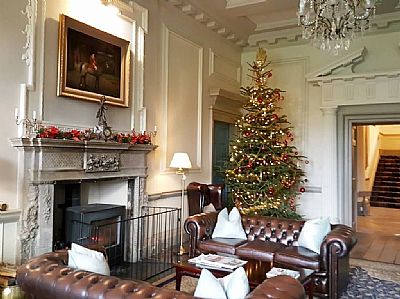 Christmas tree in the Entrance Hall at Nanteos

Decorating the house for Christmas was an important part of the preparations. A Christmas tree carefully chosen from the woodland of the estate was placed in the entrance hall, and then decorated. The inner hall staircase draped with a holy garland, and the Christmas Room on the second floor was decorated with Christmas cards all over the walls. Wonderful wood carvings by the Carpenter Vernie Rowantree were placed around the house.

One of Vernie Rowantree’s wood carving

Margaret Powell (1862-1951) especially enjoyed Christmas; she would take a lot of time and care in giving everybody Christmas gifts. Children of the estate were all welcomed into the house for tea. They would run around having great adventures in the big house (and sliding down the bannister in the inner hall when no one was looking!) The children would be allowed to dress up in clothes from days gone by, including a wedding dress that was once worn by a ‘Powell’ bride. With Margaret Powell losing her only child, she loved to have children running around filling the house with plenty of fun and laughter. 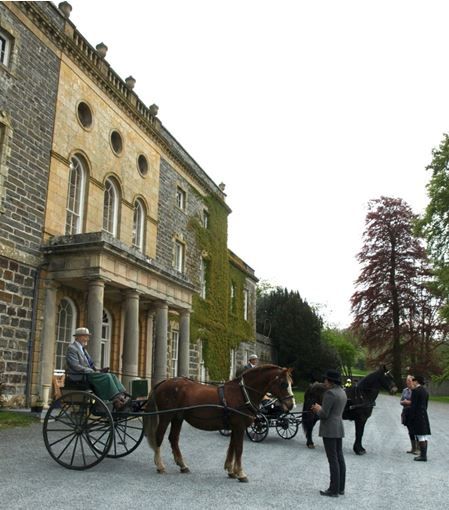 Many visitors would call at Nanteos over Christmas and many parties were held. Fun and games like ‘Sardines’ and ‘Hide & Seek’ (to name just two) were played all over the house, including the second floor. But it was under no circumstances that anyone was allowed to enter Billy’s Bedroom (bedroom of the only son of Edward & Margaret Powell who sadly died in the First World War).

Christmas was a happy time with lots of comings and goings; exchanging gifts and entertaining with friends and family. In years gone by one of the highlights of Christmas at Nanteos was the harpist Gruffydd Evans, who attended Christmas at Nanteos every year for sixty nine Christmases! He was known as the official harper to the family and played his harp in the music room. He was a relative of the Powell family and lived to a grand age of 92, and is buried at Llanbadarn Fawr Church. On a still peaceful night, it is said that Gruffydd Evans’s ghostly harp music can be heard deep in the Nanteos wood. 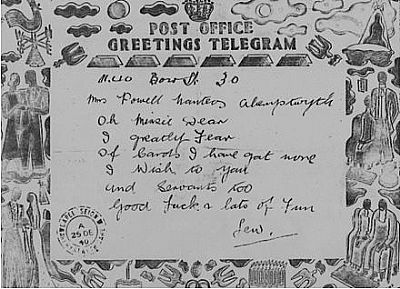 An important Harrods Christmas hamper would be delivered to the mansion, full of delights; that included meats, silverside ham and tea. The crate was kept under lock and key in the still room (only the housekeeper had the key to this room). 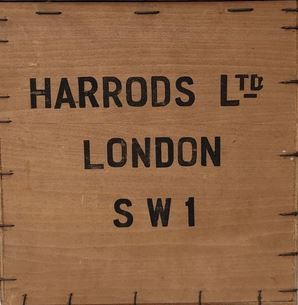 Reg Newman had grown peaches, figs and pears and other delicacies for the Christmas table. Also meat would arrive to the house from Scotland.

In the 1920-30s turkeys were ordered from Mr Thomas Jones of Cefnllech an estate farm close by, and Mr Jones would deliver the order just before Christmas.

Christmas would have been a very busy time for the kitchen staff. Not only did they have Christmas Day to contend with, but the very next day the kitchen was hectic with preparations for the Boxing Day hunt. This was a big day on the annual hunting calendar for Nanteos. Well over a hundred people would fill the house after a long day out in the field. Eating, drinking and merriment went on until late in the night. But before all that Christmas preparations had to be dealt with.

Christmas morning began with a 3 mile trip to church. The heads of the household together with their staff would travel to St. Padarn Church in Llanbadarn Fawr for the Christmas church service. Afterwards hey would return to Nanteos; with Cook eager to get back to prepare the Christmas dinner. Once back at the house, preparations began, cook would be in the kitchen shouting the orders and all the maids rushing around to get things done, while Cook prepared the all-important dinner. Dinner was to be on the table at 12 prompt, with the dining room laid out to perfection by the butler and footmen. 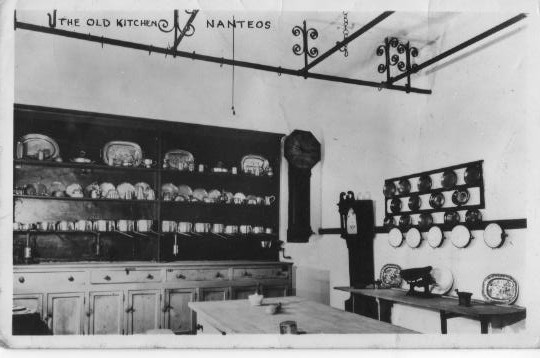 Christmas evening in the 1920s, Capt. & Mrs Powell would have all the immediate staff congregated in the entrance hall and they would sing Christmas carols around the Christmas tree and be offered warm mince pies, with a very special piece of mulberry pie from the ancient mulberry tree growing in the shrubbery (all baked by the cook), together with a glass of mulled wine by the fire. Then at the end of their enjoyment each member of staff were given a gift and some coins, and wished a Merry Christmas by the heads of the household. Later in the evening the festivities would continue in the servant’s hall with song and dance.

The poor people in the community were not forgotten either. The estate agent of Nanteos would travel around the district in his pony and trap, to deliver boxes of groceries and meat to the needy. Not even a beggar would be turned away from the door at Nanteos, without being given a few coins and food.

With all the entertaining of friends and family the estate workers were not forgotten. Workmen of the estate would be annually invited to a party held at Nanteos in the first week of January where they would be given their bonuses. Workers would sing songs and recite verses for the hosts, and at the end of a jolly evening the workers of the estate would be given a substantial Christmas box containing groceries and meat. And to close the evening’s entertainment ‘For he’s a jolly good fellow’ was sung to Captain Powell, and good health and happiness to all. 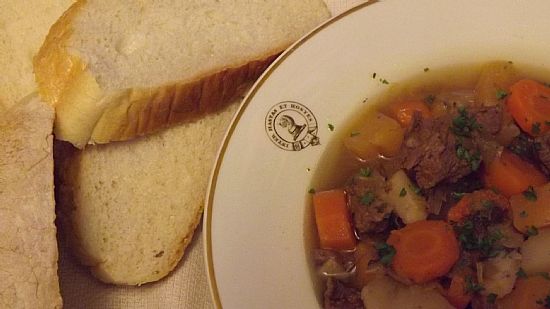 Simply boil in a large pan until cooked; then serve hot the following day, with bread and cheese.

Rind of a lemon, grated

A spoonful of nutmeg grated

Half a teaspoon of salt

A few pieces of silver threepences or sixpences

Simply mix all ingredients and steam for 8 hours. 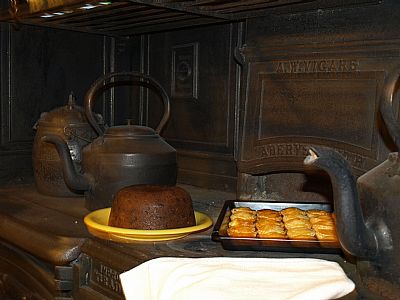 Cooking on the Nanteos kitchen range; manufactured by ‘Vigars’ of Aberystwyth.

After a late Christmas night, it was an early morning start for the kitchen staff on Boxing Day, in preparations for the Boxing Day Hunt. Cawl was already prepared the day before in big huge pots. First on the list in the morning was to get the rice pudding going on the fender, once that was out of the way, the vast preparations began. By late afternoon everything was ready and the huge feast was laid out just before the hungry hunters and followers returned. After their long day in the saddle, the hunters and followers, cold and hungry, all piled into the house. The followers, who would have chased after the hunt all day, would be exhausted and ready for a meal. They were greeted with a pleasing sight to the eyes, with all the food and drink that was available to them, they ate their fill.

Jugs of hot mulled wine were ready to be served on the hunters return to Nanteos to warm the visitors, from the cold nip in the air. Once inside the feasting began with ales, beer, wine, lemonade, and all sorts of foods - cawl, sandwiches, varieties of pies hot and cold, cold meats, chutney, pickles, rice pudding, tarts, and much more. Nanteos was overflowing with hundreds of people, and the high spirited banter and laughter echoed the corridors. Clearing up later on in the evening was a mammoth task, especially with all the muddy boots tramping in & out of the mansion. 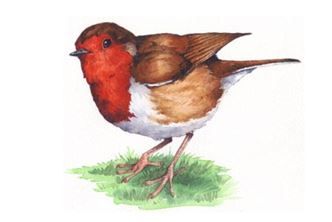 A New Year dawns, and as the day to day work continued on the estate, some New Year’s traditions held fast. A caller at the back door of a house was a strong tradition in Wales, and a dark haired man calling was seen as lucky. The householder opens the door and receives the following - salt for seasoning, silver for wealth, coal for warmth, a match for kindling and bread for nourishment from a dark haired man. If the first visitor at the house was either a woman or a red haired man it was considered terribly unlucky for the household.

Cook would prepare a New Year’s dinner; for the heads of the house, and later in the evening the staff New Year’s dinner would be held in the servant’s hall for the servants that worked indoors and out, which went on late into the night, with song and dance. 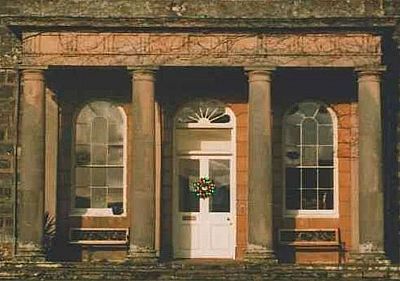 Wreath on the front door of Nanteos

On the first day of the New Year the local children of the area would call at Nanteos for ‘calennig’. Calennig was an ancient custom of wishing a household the best of health and prosperity of the whole year. Going door to door, the children would be given money and a gift as a thank you. Various Welsh songs would be sung, and verses recited. The one below is one of the most popular of the Mid Wales area.

A happy New Year to you

And to everyone in the house

This is my wish to you

A happy New Year to you

During the cold icy months the frozen lake at Nanteos gave an opportunity for ice skating. This small snippet of news in the Cambrian News 17 January 1895 demonstrates the fun they had – ‘Hockey was played on the lower pool on Friday and Saturday, there was a great deal of skating on both pools’. This shows the fun and merriment had at Nanteos during the Christmas & New Year season. 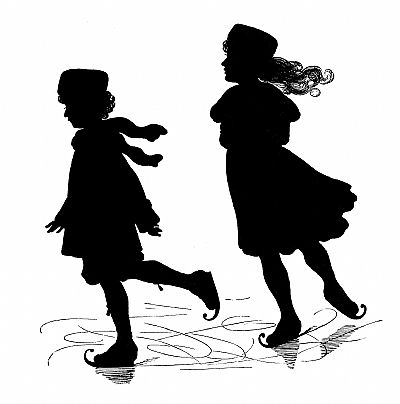 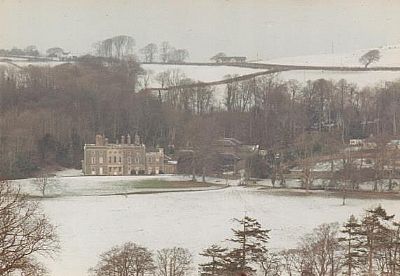 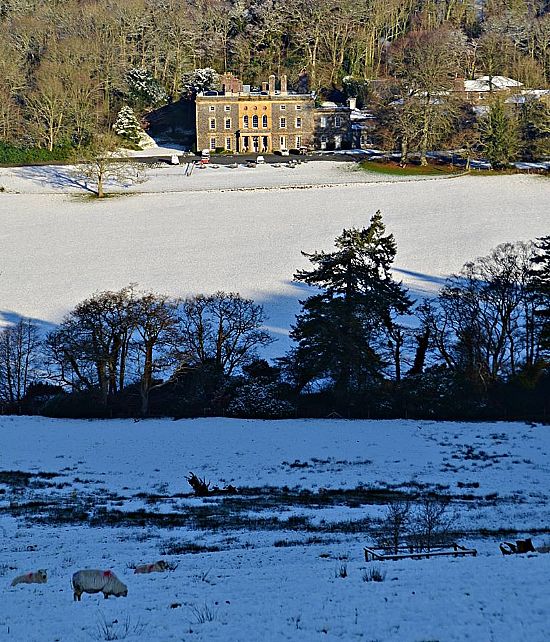