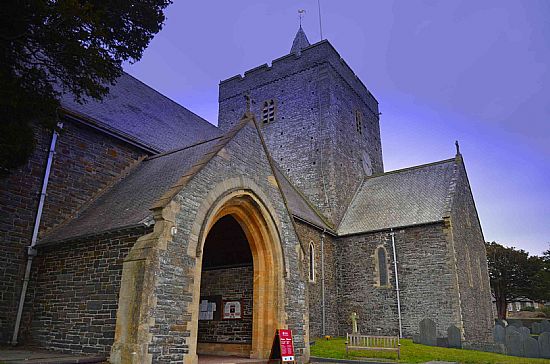 St. Padarn church is the largest medieval church in Wales, founded in the sixth century, and is a Grade 2* listed building. Located one mile East of Aberystwyth, and three miles North of Nanteos Mansion

The Powell Family of Nanteos are buried in Llanbadarn Fawr Church. The Powells of Nanteos, were landed gentry of Cardiganshire owning a vast acreage of land in the area. Some are commemorated in the stain glass windows around the alter of the church. 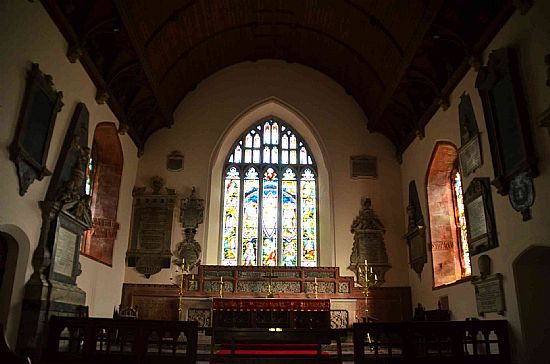 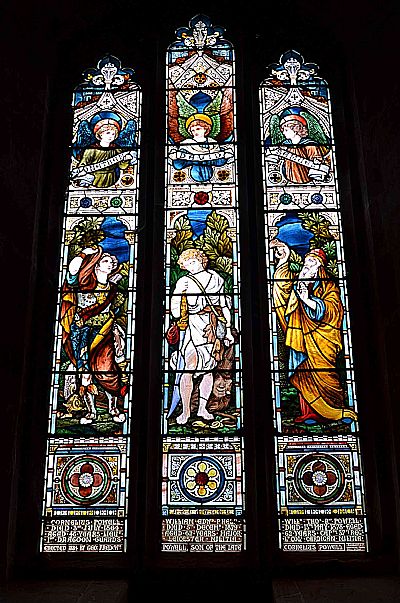 The south window commemorates three figures of the Powell  family:

The first Memorial Stone illustrated below is of Colonel John Jones, who raised the Cardiganshire Militia in support of King Charles I during the Civil War, he was the earliest known inhabitant of the Nanteos estate. He had three daughters, Mary, Anne and Elinor. Anne succeeded on her father’s death in 1666. 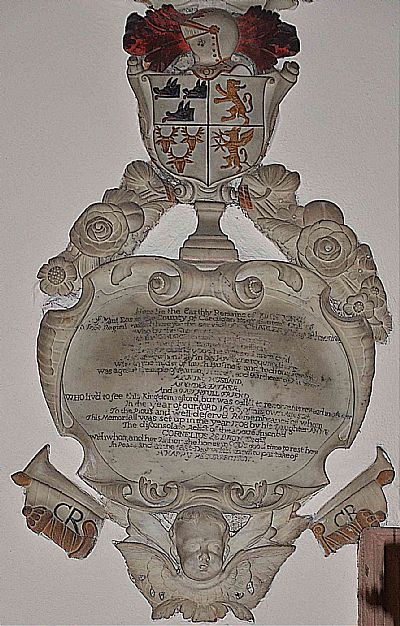 of Nant Eòs in the County of Cardigan, Esq. Lieutent Coll. of

who by the Grace of God was true

To the Church in time of persecution

To the King in time of Rebellion

when for doing good, he suffered much evil

and after when it lay in his power he required none.

Who in the midst of much business and tedious Trouble

was a great example of Learning Himself, and a Furtherer of it to others.

And a faithful Friend,

Who lived to see this Kingdom restor'd, but was called to receive his reward

To the pious and well deserved Remembrance of whom,

In peace, and at the last Day with them to partake of 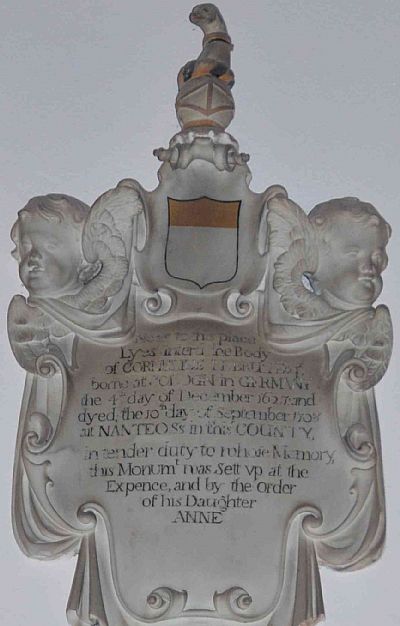 born at COLOGN in GERMANY

at NANTEOS in this COUNTY.

In tender duty to whose memory

this Monument was set up at the

Expense, and by the order 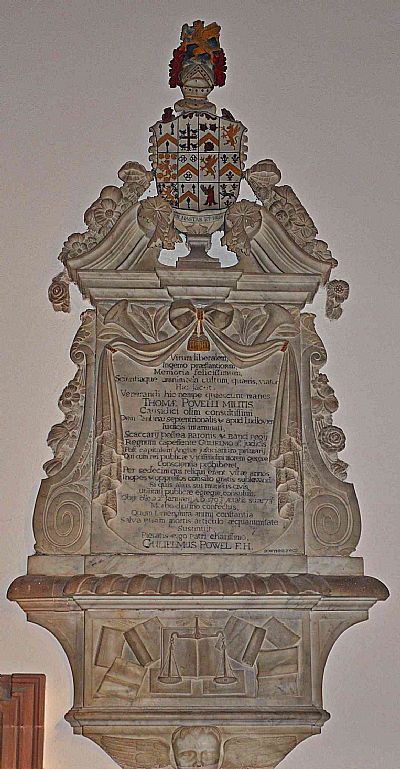 I mourn an illustrious gentleman of most happy memory, cultivated in every aspect of knowledge; [since] you ask, traveller, here he lies. Here rest the shades, undoubtedly venerable, of Thomas Powell, Knight, once a highly respected attorney, then of the North Wales circuit and at Ludlow an honoured judge, afterwards Baron of the Exchequer and a judge of the King’s Bench, administering the law of William III, first after the chief justice of England; who when conscience forbade him to comply with the state’s change of circumstance, spent sixteen years of his remaining life in alleviating the poor and the oppressed with free counsel; or if [i.e. in the case of] a citizen of his own office, he gave advice eminently useful to the public. He died on 22 January A. D. 1704/5, aged 73, long afflicted by illness, which he bore nevertheless with a marvellous constancy of spirit, preserving equanimity even in the grip of death. So to a very dear father in respect. William Powell made this [monument].

Sir Thomas Powell lived in Llechwedd Dyrus across the Paith steam from Nanteos. His son William married Avarina Le Brun of Nanteos, daughter of Cornelius Le Brun, in 1699. This is point in history where the Powell family began their long establishment at Nanteos.

Near this place lie the

Avarina his wife Daughter of

Having lived together upwards of 31 years

in uninterrupted Harmony and Affection

She among other excellencies

Possessed an understanding superior to

most of her Sex, and for ye good Conduct. and

Government of her affairs, and Family, left

He was Master of sound sense and prudence

formed on Experience, and regulated by

His Duty to the best of Fathers

Whose virtues and principles he inherited with

his Fortune, was exceeded only by his

Piety to his Creator. Both well discharged the several duties of Christians,

Parents, Friends, and were re-markabIy.

Eminent for their singular

They had Issue three Sons;

and William, and two Daughters, Eliz. and Ann.

Out of a pious regard to the memory of his

dear parents, has caused this stone to be

Here also lie the bodies of William, Charles, and

of Ann Portrey, son and Daughter of Richd

Brecon Esq. by the above mentioned Eliz.

William took over the completion of Nanteos mansion on the death of his brother Thomas (There is no record of Thomas Powell buried in St. Padarn). He died at Nanteos aged 80 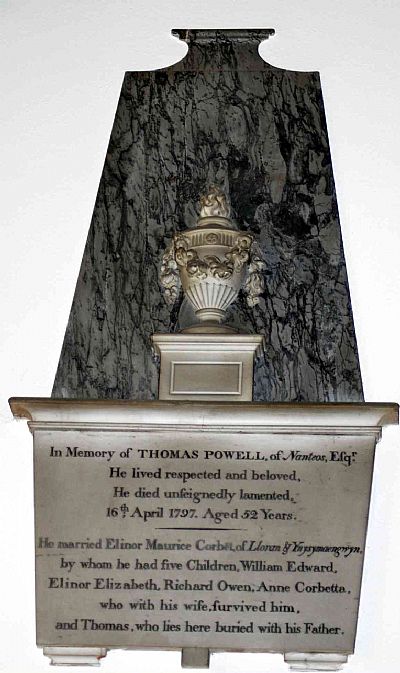 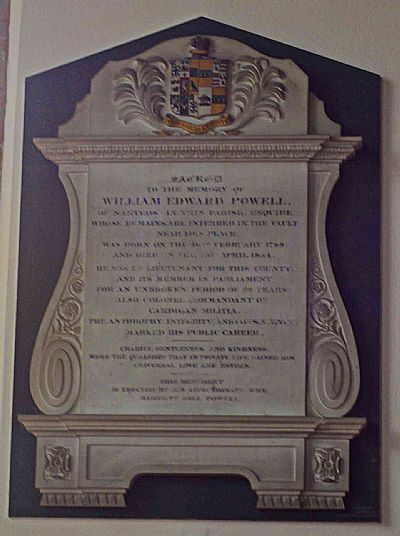 William Edward Powell died at Nanteos, and this menorial tablet was erected by his 2nd wife, Harriet Dell Powell. 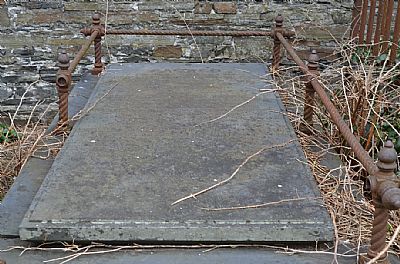 Sacred to the memory of Richard Owen Powell, Esq., who departed this life on the 4th June 1859, aged 65 years. 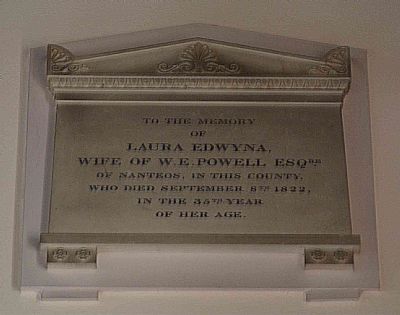 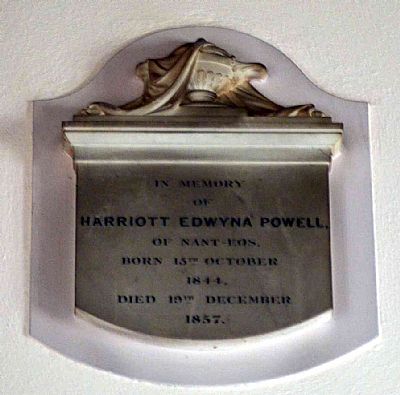 Harriott Edwyna Powell dies at Nanteos in 1857 of comsumption. 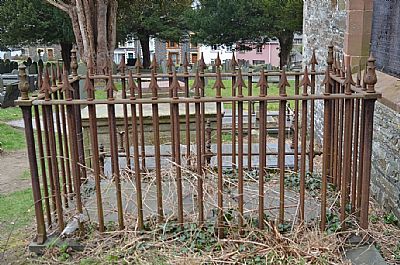 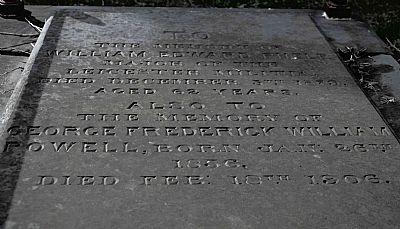 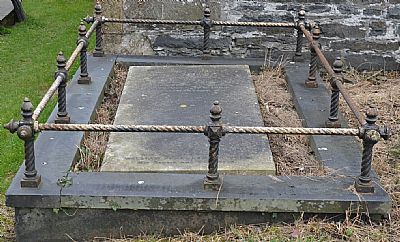 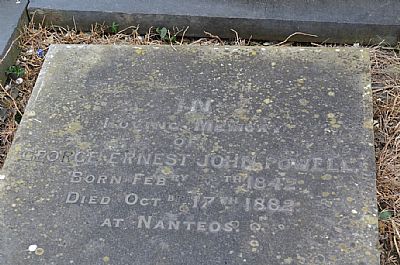 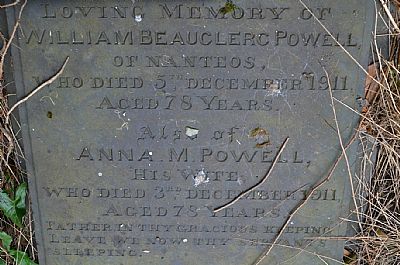 William Beauclerc Powell and his wife Anna Maria Powell died at Nanteos within two days of each other. 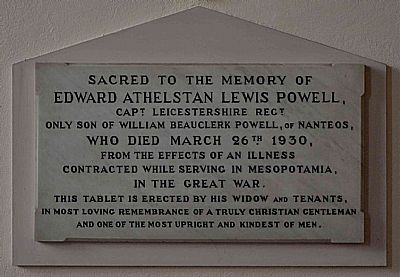 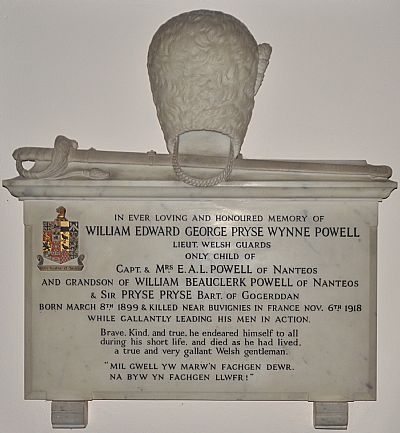