The cellar in any large country mansion was an essential part of the household, kept well stocked up with wines, sprit and beer for everyday use.

The cellar at Nanteos is located below ground level and is roughly the length of the Morning Room, Entrance Hall and Study at the front of the building and measuring 57½ feet (17.5meters) in length. 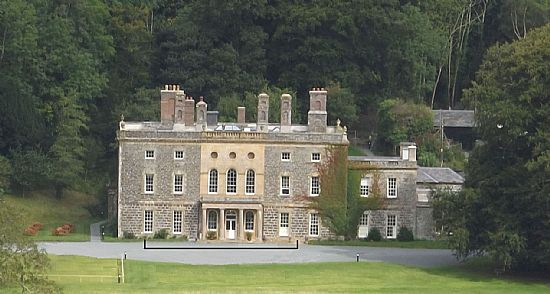 There is evidence of an older house in the cellar suggesting that the Georgian mansion seen today was built on a previous house located on this spot, which could possibly be Neuadd Lawdden, built in the 13th century possibly earlier. The land that surrounds the mansion has been landscape and the ground we see today brought to a higher level. 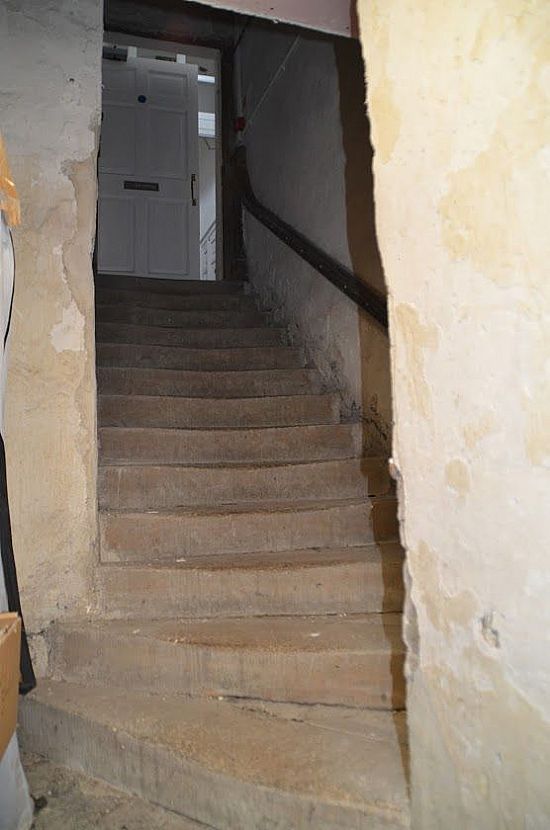 On closer inspection the steps can be seen worn from centuries of use.

During the Powell time the cellar was full of wine, spirits and beer all labelled and kept in their proper compartments. Beer was made on site in the brewery, which was located in an outer buidling in the courtyard. 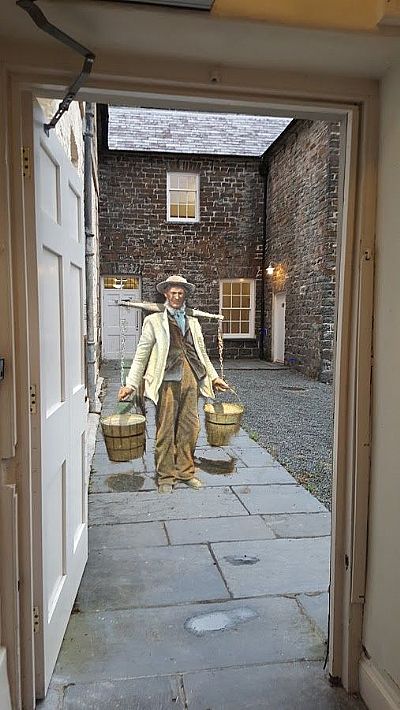 The cellar is a large area, with plenty of room for storage of an array of alcohol. 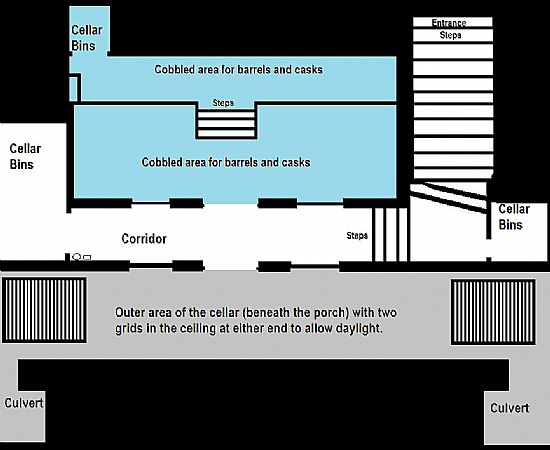 Plan of cellar, (not to scale)

The blue area of the map is evidence of the former house which can be clearly seen, with an old doorway entering into the main room; and two cottage timber windows that have been blocked up with planks of wood, together with wattle and daub. What can be seen is very like a 13th century cottage; with a central front door with windows at either side. The grey area of the plan above is the external part of the cellar; which is underneath the porch of the mansion.

The cellar itself is in three sections, the main room in the centre which is the largest, and held barrels and caskets; the floor is of slate and cobble stone. 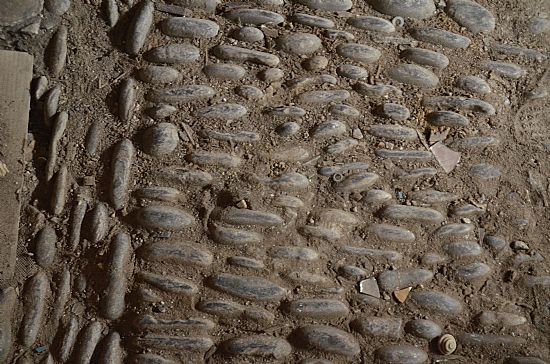 Cobbled floor on the upper deck of the main cellar

There is also a small narrow room at the rear on the left hand corner which has wine bins, that can be seen in the photograph below. 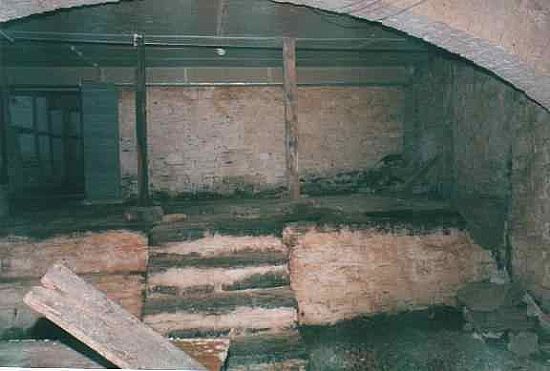 The main section of the cellar in 2004, with the small room with cellar bins on the left.

The second largest room located at the far end west side of the cellar. This is where the wines were kept, in red brick arched wine bins, with slate flooring. The bricks are the same as what was used in the walled garden and were produced by the estate.

In 1791 John Hussey was the main bricklayer for the Nanteos estate, though many labourers would have worked on the process of making bricks. The bricks were produced in Capel Seion, north of Nanteos, across the road from Pencefn farm, in the field aptly named Cae Bricks (Brick Field). The clay was sourced from the field, pebbles and small stones were added to the mixture, together with lime and other components. Water was sourced from a well and a spring that flowed naturally through the field, of cae bricks. These bricks would have been used for the construct of the cellar bin arches seen within the cellar. 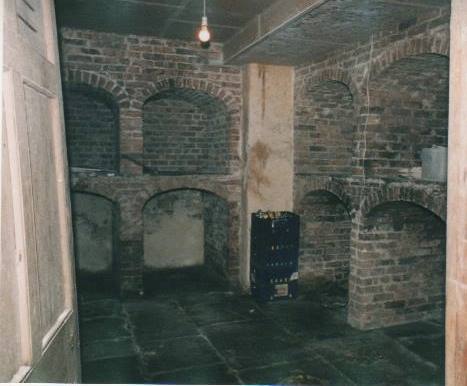 The second largest room, where the wine was stored.

Above each barrel bin was a label of ceramic Wedgwood pearlware showing different types of alcohol they had, clearly labelled so that everything was kept in its place. 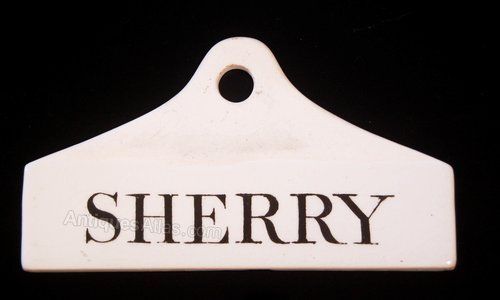 The third room is a smaller chamber for the bottles of expensive spirits, kept under lock and key. Spirits and fortified wines were kept in the third room of the cellar; this room was kept locked at all times. 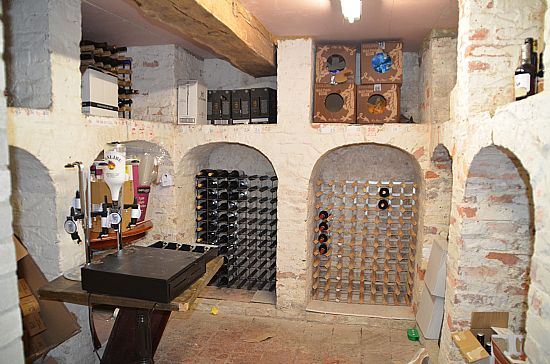 The smallest room, with seven brick cellar bins and storage space above; this is where the expensive spirits and champagne was kept under lock and key.

In the cellar corridor, close to the drain, there is a large long lead pipe, which is believed to be a ventilation shaft. On inspection, day light can be seen at the top, which suggests the pipe ran the whole height of the mansion from top to bottom; the drain would also drain away any rain coming down the pipe. 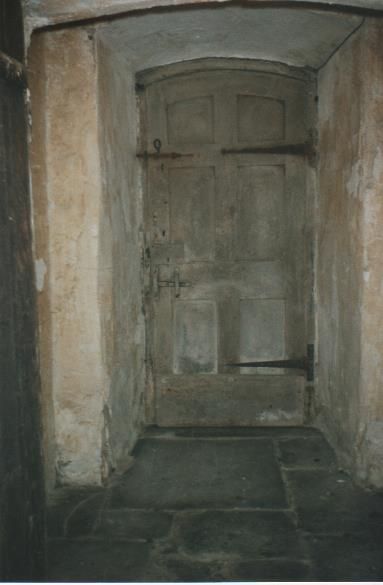 The door leading out to the outer part of the cellar, which is located underneath the porch.

In the corridor of the main part of the cellar, on the left is a large door that leads to the outer area, (shaded in grey on the plan) which is directly beneath the main door porch of the mansion). The floor of the outer area is a cobbled; and the only light in this area were the grids on either side of the porch above, now sadly covered over. 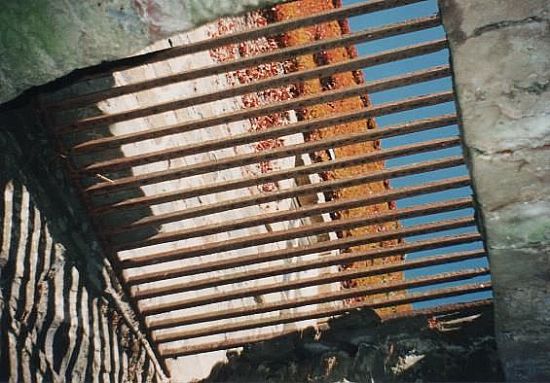 Grids were located on opposite side of the porch at Nanteos, letting in light and air.

Flowing water can be heard in the outer area of the cellar; culverts are a major part of the drainage system at Nanteos, a network of watercourses run under the mansion. Frogs and toads are often found in the cellar coming up from the water flowing culverts.

Wines and spirits were bought from Joseph Downie in Eastgate Street, Aberystwyth, and also orders from other victuallers and spirit merchant, some as far away as London. Below is one example of an order.

There was a very strict code of conduct at Nanteos, regarding deliveries -

Any Article delivered without an order issued by COL. POWELL, CAPT. PHELP, or Mrs. Overton, (the Nant-Eos Housekeeper) for the time being, will not be paid for. Persons, therefore, who deliver any Goods on the faith of verbal messages, or the order (whether written or not) of any person whatsoever except the above, do so at their own risk.

All accounts to be addressed to

A daily allowance of beer was given to staff, available if desired during meal times, including breakfast. Also on special occasions extra beer was given – for example, a family wedding, or coming of age of the son and heir of the Powell family; and also of royal occasions – a Royal wedding or jubilee celebrations.

For reasons unknown the cellar door could be locked from the inside the lock keeps are still in situ (see photograph below). 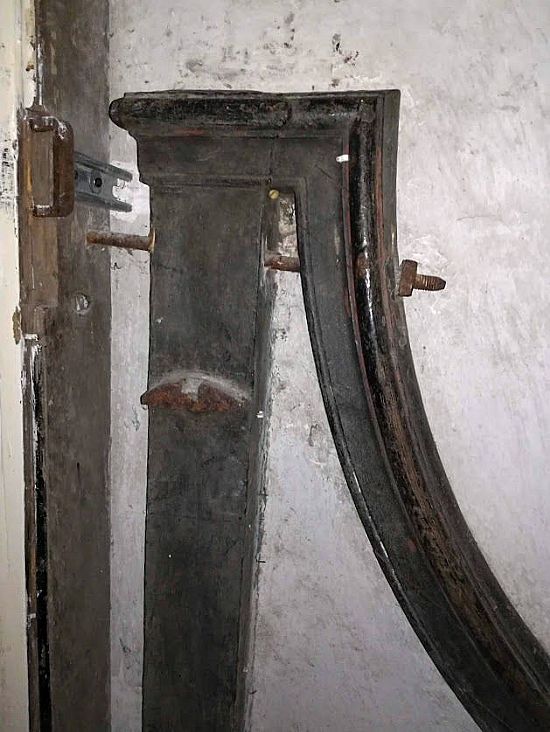 The two lock keeps seen in the photograph, one is located on the hand rail post, and it looks as though to would have held an iron bar that would have been placed across the doorway to stop it being opened from the outside. The other is closer to the cellar door, which looks as if it is a replacement.

Only the head of the household and the Butler had a key to the cellar. On several occasions when the Powells went away or stayed at their London house, it was said that George White who was the Butler during in the 1840s, held wild parties with the staff at Nanteos, George having the only key to go down the cellar to take alcohol for the cellar. William Edward Powell got to hear of these parties and the key was immediately confiscated from George White, which was followed by his dismissal. On leaving Nanteos, he asked Mrs Powell for a reference; she wrote simply, ‘George White only stayed one night’. However, his time at Nanteos is certainly remembered, he is mentioned in the Welsh Gazette of 1905 for the saying, ‘Nanteos ale both strong and stale, keeps my nose from looking pale’.

Recently, three unopened bottles of Champagne from the cellar still wrapped in straw were found hidden in the attic of the water closet in the butler’s quarters, obviously taken before the key was confiscated and lay forgotten for well over a century.

Inventories of Nanteos (now kept at the National library of Wales), give a clear indication of what was kept in the cellar at certain points in time.

A hamper of corks

On the 3rd of September 1793 it can been seen from the list above that not much alcohol was kept at the mansion at that time. The large amount of hogsheads kept in the cellar, were probably salted and for use in the kitchen which is located in the service area directly on top of the cellar stairs. The rest of the meats were probably hung in the game larder situated in the court yard. With the hamper of corks listed it looks as though a delivery of brew to the cellar was imminent. Brew was made at Nanteos in the Brew House which is located in the court yard, and was in use for many years.

By the 1882 inventory there is a vast difference in stock, it shows nearly 1,500 bottles filling the wine bins in the cellar.

The cellar had been in use for storing wines, spirts and beer for centuries. In the dwindling years of the Nanteos estate held by the Powells, from around the 1930s onwards there was a decrease of contents due to lack of funds, the cellar became empty of what it was intended for and became an area for storage and where Margaret Powell’s grew her mushrooms in the 1940s.

Today, the cellar has now returned to its former glory and houses a storage for wines, spirits and beer for the Plas Nanteos Hotel.