Signatures in the Landscape

Arborglyphs (tree carving) can be found all over the Nanteos estate, ranging from the distant past right up to the present day. Initials and names can be seen carved on tree trunks (mostly beeches and birches), blocks of slate, windowpanes, doors and even lead drainpipes. The carvings are a snapshot in time, when the individuals would stop for moment in their busy lives to leave their mark. Many were skilfully executed, made with clear precision, and cleanly cut, making them still visible today. In some cases, over a century later others are less clear, but still provide a mark from the past.

Most of the initials were made by gouging them into tree trucks which the individual concerned may have walked past regularly, going to and from their place of work, toiling the land or going to the pub. It is impossible to know precisely why they left their various marks, whether it was to indicate a well-loved spot or to commemorate their time on the estate, or even adding to something others had done before. Whatever the reason they are there to be seen and enjoyed, giving a glimpse into the past.

With regular storms over the years many trees have been blown down and so many carvings have been lost, but fortunately many have survived and have been recorded here before they too are lost to nature. Although most of the initials and signatures can be identified as belonging to estate workers and tenants, a significant number belong to unknown scribes, possibly passing visitors who have now been lost forever in the anonymity of history.

Below are a few examples of the initials of people known to have lived and worked on the estate. 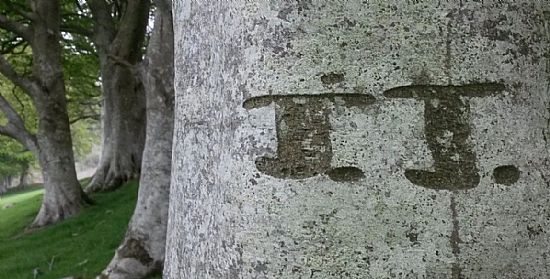 J. J. carved on one of the large Beech tree in the Henrhyd.

This is probably the signature of John Jenkins of ‘The Buildings’ Home Farm, known ‘Jack the Buildings’. It is etched on a Beech tree on the Henrhyd, pre- c.1946. John Jenkins regularly walked through this field on the track leading to the Gors Inn, in New Cross. It was the nearest public house to his home. 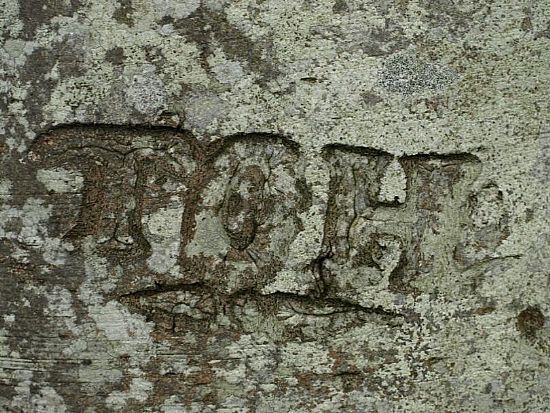 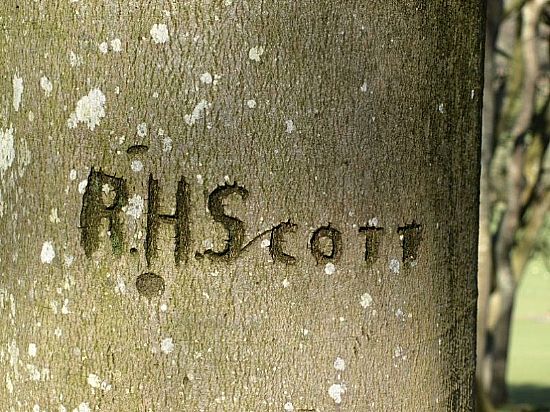 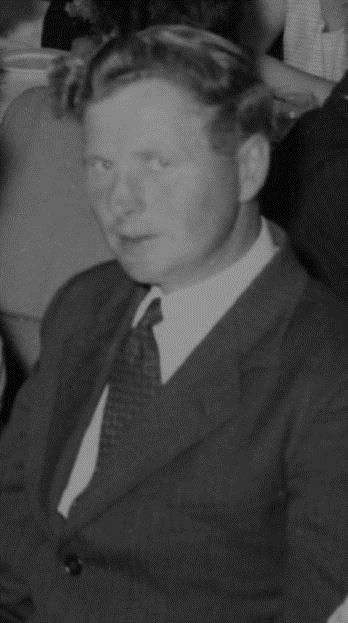 Richard Hugh Scott moved to ‘The Building’ in 1946 with his family, from Pantycyrnau, Gors. He was born in Cwrt y Fancy and is buried in Horeb Chapel. He carved his name on a Beech tree at the top of Henrhyd field, which is practially a central point of all the places connected to him. 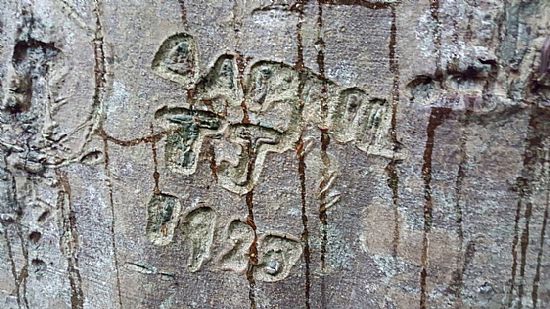 This carving (above) was probably by Tom Jenkins who lived in Penparcau, and who would have passed Penglanowen wood every day on his way to work at Nanteos. He began working at Nanteos as a young errand boy, and continued working with Margaret Powell as her right-hand man until her death in the early 1950s. His initials are carved on a beech tree in Penglanowen wood; we can only guess what was significant about the 4th April. 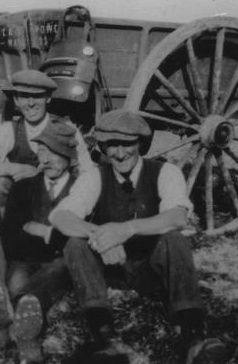 Tom and Richard Jenkins his brother from Penparcau (with Dick Hughes in the centre).

Tom Jenkins (Father of Tom & Ricahrd above) signed T. Jenkins BRICKE on the lead drainpipe at Nanteos, located on the west said of the mansion. He also etched his name again with the word Bricke, on the roof on the base of one of the chimney stack.

The gateway to the back entrance of Nanteos, in Moriah has many initials and markings, one can be identified as David Scott who lived in the ‘Buildings’ Home Farm, his initials can also be seen on various trees and slate on the estate, also those of his son Richard Hugh Scott (as illustrated above). 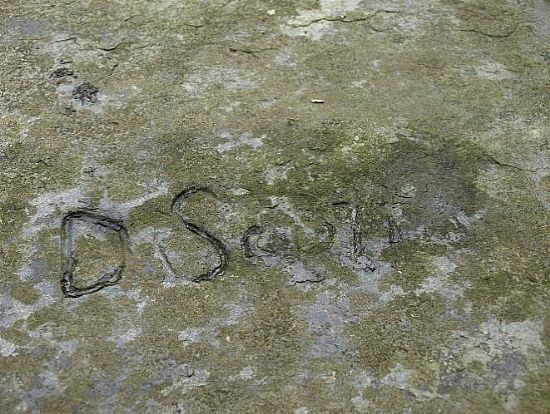 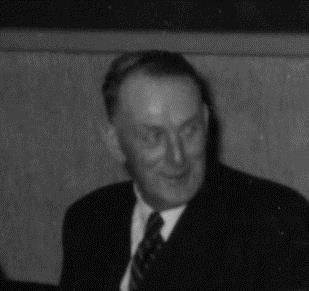 A couple of etching on slate can be seen near the Nanteos Lodge. 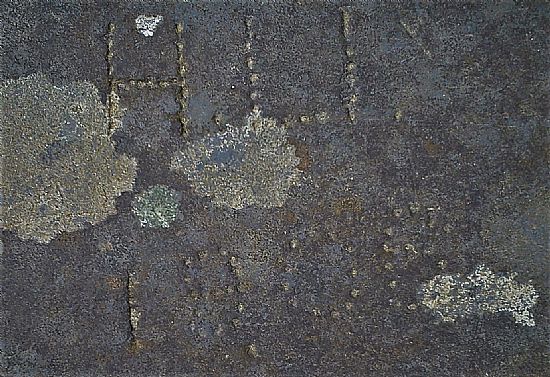 A punched etching made of dots near the Nanteos Lodge.

This dot work is of Hugh Lloyd, estate agent at Nanteos who punched his initials and year ‘H. Ll. 1908’ on the slate. It is located on a capstone close to the Nanteos Lodge.

Also near the Lodge is another inscription, 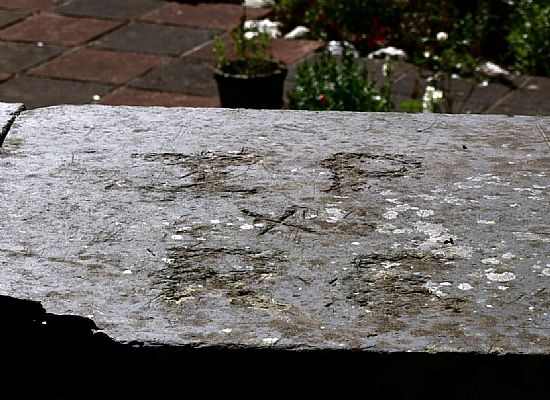 Ieuan and Robert Pugh were two brothers who lived at the Lodge, with their family from1945 until 1949. The above etching at the rear of the Lodge. Richard Pugh has also inscribed the lead drainpipe at Nanteos several times.

Leaded drainpipes attached to the mansion are covered with signatures and markings. More so located on the west side on the mansion, and quite densely scribed in some areas. The earliest initials that can be detected on the lead drainpipe is G. W. – 1820. This is almost certainly that of George Warbrick, who the Estate Agent was at that time. He worked on the estate for three years from 1820 to 1823. 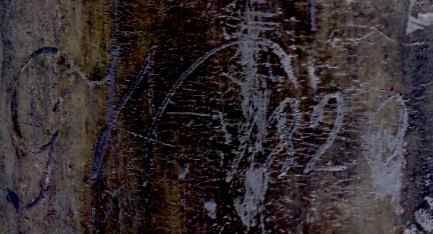 The oldest marking visible on the lead drainpipe - G.W. 1820

Another old inscription, that can also be found on the lead drainpipe, is that of Edward Edwards (1779- 1867) of Ty’n y Cwm, who worked on the estate for many years, as a labourer, painter and cowman.

On the lead pipe, on the west side of the mansion John M Jones signed his signature. He lived with his wife at Tynycoed in Capel Seion. He was not one of the regular estate workers, but from time to time worked on the estate as a casual labourer. 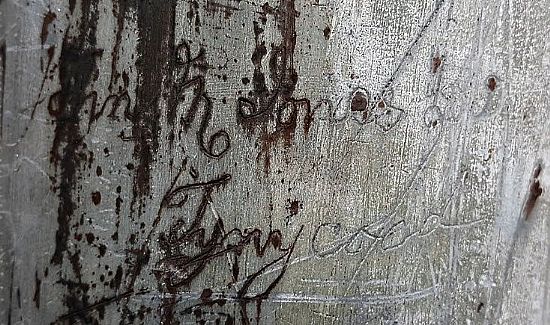 John Morgan Jones D.D. on the lead drainpipe at Nanteos 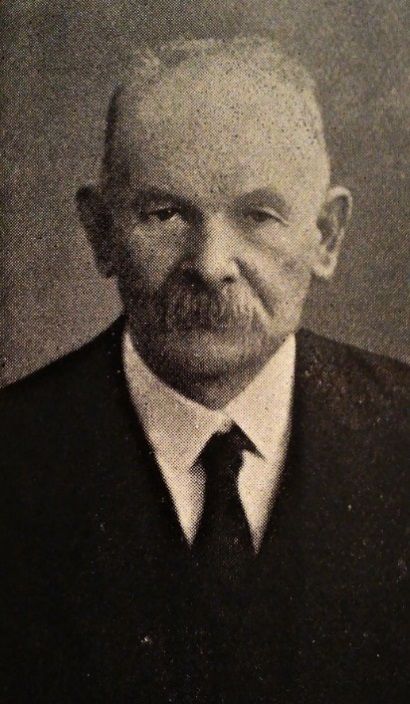 Daniel Stephens was a gardener at Nanteos who etched his name several times on the lead drainpipe, he worked in the walled garden for Reg Newman. 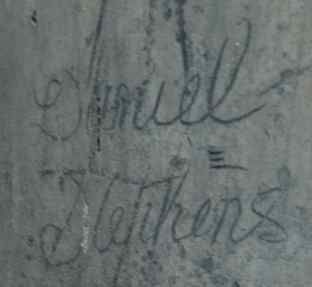 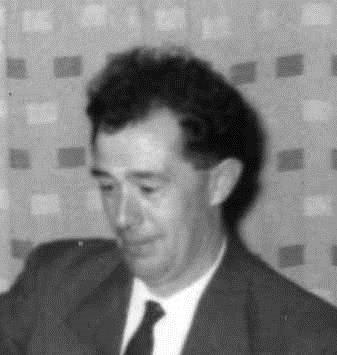 An interesting collection of four workers’ signatures can be found on the attic room door on the second floor of the mansion. The door once led to the attic rooms, which were demolished in the 1960s, however the door has been kept in situ for posterity. 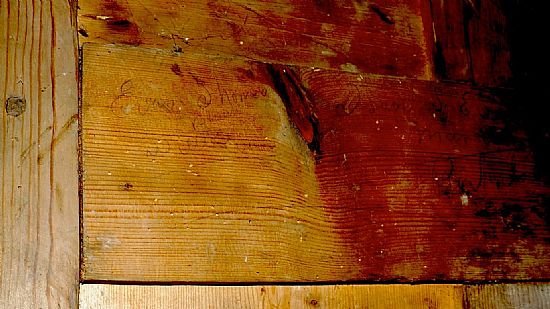 Isaac Evans, mason worked on the Nanteos estate in the 1920s and 30s.

The signature of George White, the butler, is etched on a window pane in the butler’s sitting room; he worked at Nantoes in the 1840s, his exploits have been discussed in more details in another chapter.

Workers of the esate, worked on many tenant farm, repairing and improving farm houses and buildings. While renavating Pantycyrnau recently a piece of history came to light. 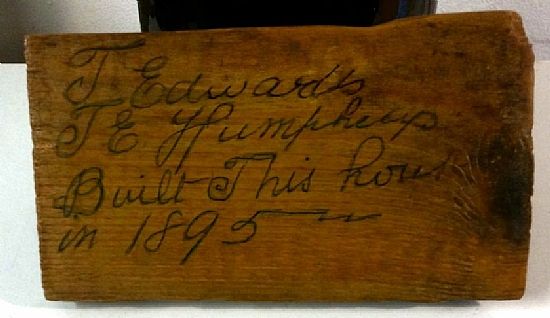 A piece of timber the carpenters left at Pantycyrnau

Thomas Edwards, of Gors Isaf, in New Cross and Tommy Humphreys of Llain, Moriah who were tenants and carpenters at Nanteos, left their mark while repairing Pantycyrnau farm house in the 1890s 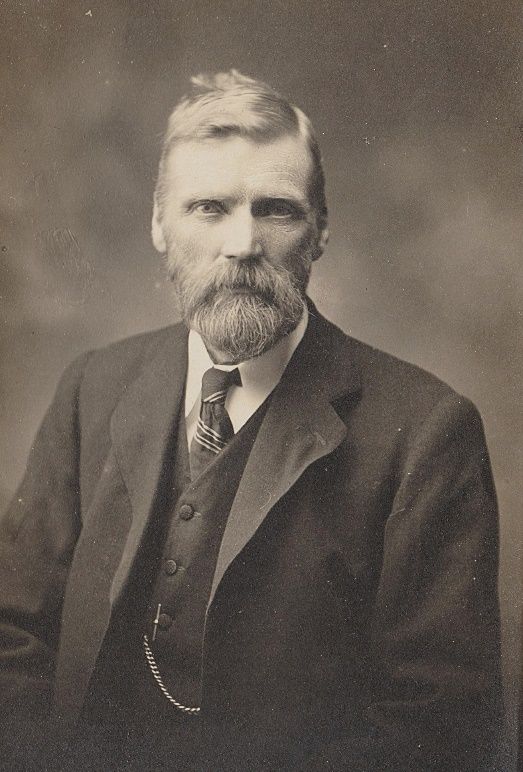 It was not only the staff and tenants who carved their names around the estate. William Edward Powell (1788-1854), William Thomas Rowland Powell (1815-1878) and William Beauclerc Powell (1834-1911) all left their respective marks, and these can still be seen today.

Branding mark in the Tack room of the Nanteos Stable.

William Edward Powell’s branding mark in the tack room of the stables.

Branding mark in the Saddle room at the Nanteos stables. 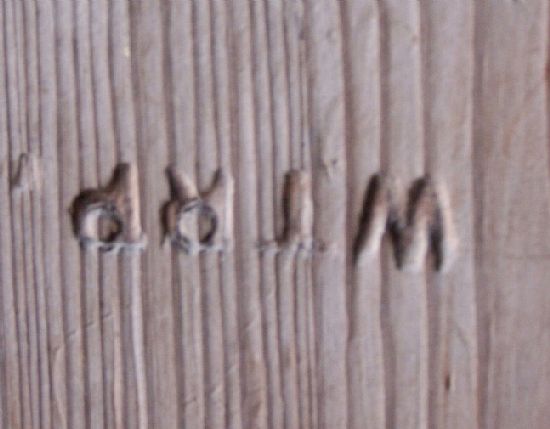 William Thomas Rowland Powell’s branding mark upside down in the saddle room in the stables. Upside down perhaps just trying it out! Branding irons have been used for centuries as far back as the Romans. Used for marking animals, mainly horses and cattle with an identifying mark, by heated metal; a method still used today. 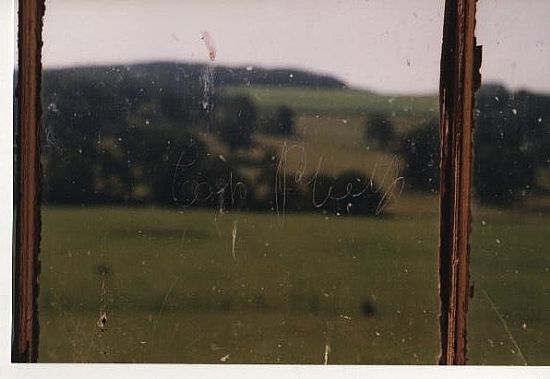 This is Captain William Edward Phelp’s signature etched on the window of the Macaw room, which was his bedroom at Nanteos. He was William Thomas Rowland Powell’s first cousin, and became his right-hand man, when William T. R. became disabled.

W.B.P. (William Beauclerc Powell) craved his initial on at least two trees on the estate. One carving is close to the mansion in the woodland, and the other is carved on one of the trees in the Beech Clumps on the Henrhyd field, south-east of Nanteos. 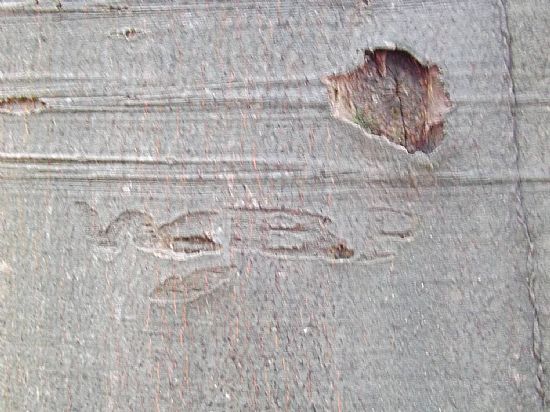 His initials are also professionally carved above the door of the farm house of Penglanowen, with his wife’s initial AMP 1888 on a corner stone of the same dwelling. 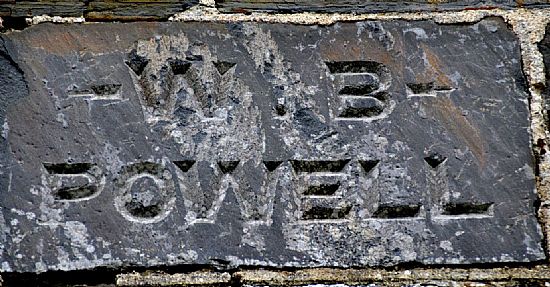 The Initials of William Beauclerc Powell above the front door of Penglanowen farm house. 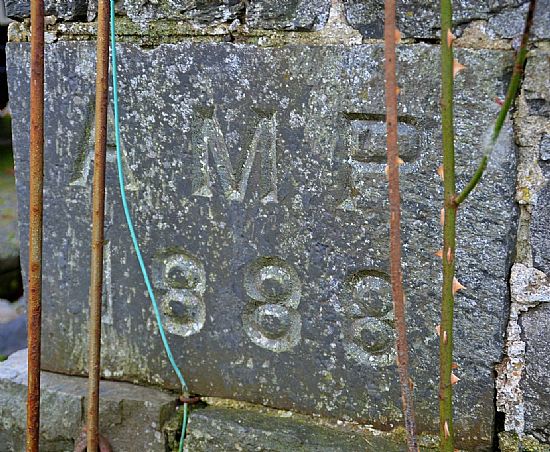 The corner stone on the front elevation of Penglanowen farm house. The initials are of Anna Maria Powell, wife of William Beauclerc Powell.

In conclusion, the examples of Arborglyphs recorded above, provide a glimpse into the past, and help bring the estate and its former inhabitant to life. They demonstrate a desire on the part of numerous individuals to take time out from their busy working lives on the estate to leave their names for posterity. This gives the people of today a glance of the past, and provides some solid evidence of those people who walked the land and carved a record of their time at Nanteos.